Eurogroup chair: ‘I was angry because of the beautiful promises made to Greeks... that weren’t true’ 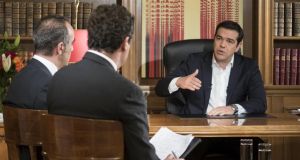 Greek prime minister Alexis Tsipras defended the bailout deal struck at Sunday‘s euro zone summit and ruled out resigning, saying that the “bad deal“ was the best available under the circumstances.

“I am fully assuming my responsibilities, for mistakes and for oversights, and for the responsibility of signing a text that I do not believe in, but that I am obliged to implement,“ Mr Tsipras told Greek public television on Tuesday.

In an hour-long interview that mixed a defence of his abrupt change of course over the bailout deal with barbs aimed at Greece‘s European partners, Mr Tsipras said he had fought a battle not to cut wages and pensions.

He also said that even though some countries had resisted giving Greece “fresh money” - Finland and the Netherlands in particular - they relented in the end.

“To be frank, here, they are not only forced to give fresh money, but to give 82 billion, and are accepting the restructure of debt.”

The 40-year-old prime minister faces strong discontent within his Syriza party over the deal.

But he said he intends to serve a full four-year term, ruling out early elections.

“The worst thing a captain can do while he is steering a ship during a storm, as difficult as it is, is to abandon the helm,“ he said.

Asked when Greece‘s banks would re-open, after closing more than two weeks ago when capital controls were imposed, he said: “When banks open depends on when we have the final ratification of the agreement.“

The European Central Bank, which has set a cap on emergency liquidity to Greek banks, would “move to gradually increase it“, allowing a gradual relaxation of capital controls, he said.

“It won‘t be from one day to the next. There will be a gradual return to normality, starting with an increase in the withdrawals.“

One of the provisions of the agreement with creditors is setting aside 25 billion euros for the recapitalisation of the country‘s banks.

Mr Tsipras said he did not believe the banks required the entire amount. “Twenty five billion is more than enough. I believe banks will need 10-15 billion euros.“

Having staved off financial meltdown, Mr Tsipras has until Wednesday night to pass through parliament measures that are tougher than those Greek voters rejected in a referendum days ago.

With mutiny among hard-liners in his own ranks, Mr Tsipras will probably need the support of pro-European opposition parties to carry the vote.

“The hard truth is this one-way street for Greece was imposed on us,“ Mr Tsipras said.

The lenders had sent the message that in a country under a bailout there was no point in holding elections, he said.

But he insisted that things would have been worse had there been no deal.

“A disorderly default would not only have led to a collapse of the banking system and a disappearance of all deposits, but it would force you to print a currency which would be drastically devalued because there is no reserve to support it,“ he said.

“A pensioner who got 800 euros would get 800 drachmas and it would only last him three days and not a month.“

He said that he would do all he could to maintain the unity of his Syriza party, but his priority was to secure a deal and the stability of the economy and banking system, before dealing with party matters.

Asked if he would expel rebel party lawmakers if they vote against the bailout deal, he said expulsions not part of his party‘s culture.

In another interview, the head of the Eurogroup of finance ministers said Greece had tested the limits of Europe’s patience and understanding and said he had been angry with Mr Tsipras over his “beautiful” but false promises to the Greek people.

After a tempestuous weekend of negotiations in Brussels , Mr Tsipras agreed to enact tough reforms in return for urgently needed loans to keep the almost bankrupt Greek economy afloat.

It marked a dramatic U-turn for Mr Tsipras just one week after he persuaded Greek voters to reject a similar package of austerity measures in a referendum he had hoped would strengthen his hand in negotiations with the other 18 euro zone states.

In an interview with Dutch television’s Nieuwsuur, extracts of which were released ahead of broadcast, Eurogroup chair Jeroen Dijsselbloem said Tsipras’s tactics had made it harder to secure financial support for Athens.

“You have to realise that if we’d held referendums in the other 18 countries on whether we should give more money to Greece, the result would have been much more striking and more negative than the 60 per cent who voted (against austerity) in Greece,” said Mr Dijsselbloem, who is also Dutch finance minister.

He said Mr Tsipras’s decision to call a referendum had led to “enormous disbelief and disappointment” in the euro zone.

“I was angry because of the beautiful promises made to the Greek population that weren’t true. You can’t promise things that you can’t bring about,” Mr Dijsselbloem was quoted as saying on the television website.

He said Greece’s economy would be stronger after it has implemented the tough measures required as a condition for the bailout.

On Tuesday evening Mr Tsipras, who must start to implement the measures this week, said the agreement reached in Brussels, though harsh, had saved Greece from exiting the euro and suffering an economic meltdown.