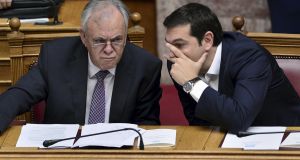 Greek prime minister Alexis Tsipras (right): has told his electorate he will comply with the terms of the three-year bailout. Photograph: Louisa Gouliamaki

Euro zone finance ministers gather in Luxembourg for two days of scheduled meetings that are expected be dominated by Greece, with finance ministers due to sign off on new corporate tax sharing rules tomorrow.

Greek finance minister Euclid Tsakalotos will meet his euro zone counterparts for the first time since the election of September 20th which returned Syriza to power following months of bitter negotiations with international lenders about a new bailout package.

Today’s meeting comes as Greek prime minister Alexis Tsipras told his party over the weekend that the government must implement the terms of the bailout programme and complete the first review by mid-November in order to open discussions on debt relief.

But EU officials have played down expectations of significant debt relief for the programme country.

Klaus Regling, head of the euro zone’s bailout fund, told the Financial Times last week that Greece was not in need of large-scale debt relief, noting that the country had already received the most concessionary loan terms “in world history”.

Mr Tsakalotos is expected to submit the draft budget for 2016 before his departure for Luxembourg.

The new Greek government began the process of implementing difficult austerity measures required under the €86 billion bailout package finalised in August, last week, with the government confirming the abolition of a reduced VAT rate on six of the islands, with more islands entering the scheme in 2016 and 2017.

Mr Tsipras, who was first elected as prime minister in January on an anti-bailout platform, has told his electorate he will comply with the terms of the three-year bailout.

However, the rate of implementation of reforms has been slower than expected, due mainly to last month’s snap election.

With capital controls still in place in Greece, much is dependent on the results of the ongoing asset quality review and stress tests of the Greek banks being undertaken by the European Central Bank. Approximately €25 billion of bailout is earmarked for the Greek banking system.

Under new bail-in rules due to enter into force on January 1st, 2016 , depositors could be liable for any shortfalls revealed, increasing pressure on the Greek government to resolve the bank recapitalisation issue before the end of the year.

Euro zone finance ministers are expected to discuss a proposal to allow extra funds to be unlocked for the Greek banking sector if certain financial reform milestones are met imminently.