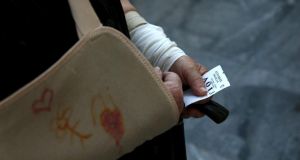 A pensioner holds a priority ticket outside a National Bank branch as they wait to receive part of their pensions in Athens. Photograph: Yiannis Kourtoglou/Reuters

The Greek government submitted legislation to parliament on Tuesday required by its international lenders to start talks on a multi-billion euro rescue package.

Prime minister Alexis Tsipras has until Wednesday night to get those measures adopted in the assembly. A first set of reforms triggered a rebellion in his party last week and passed only thanks to votes from pro-EU opposition parties.

The second bill, though less divisive, will still be a test his weakened majority.

It puts into Greek law new European Union rules on propping up failed banks, decreed after the 2008 financial crisis and aimed at shielding taxpayers from the risk of having to bail out troubled lenders.

The so-called bank recovery and resolution directive (BRRD) imposes losses on shareholders and creditors of ailing lenders, in a process known as “bail-in”, before any taxpayers’ money can be tapped in a bank rescue.

The European Commission in late May gave Italy, France and nine other EU countries two months to adopt the rules, which were meant to be applied by the end of 2014, or face legal action.

Together with his coalition partners from the right-wing Independent Greeks party, Mr Tsipras has 162 seats in the 300-seat parliament. But last week’s rebellion cut his support to just 123 votes, meaning he is likely to need opposition votes again.

Greece on Monday reopened its banks and repaid billions of euros owed to the International Monetary Fund and the European Central Bank in the first signs of a return to normality after it struck a cash-for-reforms deal with other euro zone countries last week.