Greece likely to make €3.5bn payment to ECB on Monday 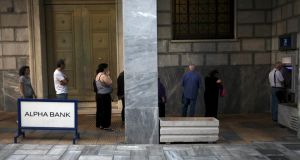 People line up at an ATM outside an Alpha Bank branch in Athens, Greece on July 16th, 2015. Greece awoke with a political hangover on Thursday after parliament approved a stringent bailout programme, thanks to the votes of the pro-European opposition, amid the worst protest violence this year. Photograph: Yiannis Kourtoglou/Reuters 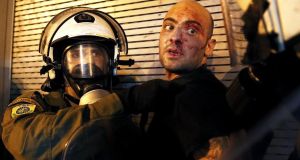 A protester is arrested by riot police following clashes in Athens on Wednesday. Photograph: Yannis Behrakis/Reuters 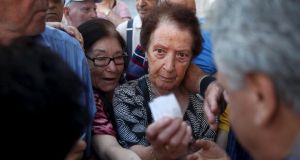 Pensioners are given priority tickets by a bank branch manager as they wait to receive part of their pensions in Athens on Thursday. Photograph: Reuters 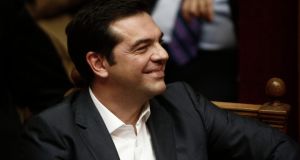 Greece is expected to meet a key €3.5 billion payment to the European Central Bank on Monday after the eurogroup of finance ministers approved a €7 billion bridging loan for the indebted country.

Euro zone finance ministers on a conference call on Thursday morning decided to back the European Commission proposal to offer a €7 billion bridging loan to Greece from the European Financial Stability Mechanism (EFSM) fund, despite opposition from Britain.

A proposal to guarantee the contributions of non-euro countries such as Britain and the Czech Republic with euro zone funds was expected to placate opposition from London.

The eurogroup’s move was seen as an important political signal following Wednesday’s vote in the Greek parliament which saw Greek MPs back a raft of austerity measures demanded by creditors in exchange for a third bailout package.

Though work on technical details of the short-term loan will continue until tomorrow, the new loan will be the first disbursement of cash from creditors to Greece in months.

The ECB also announced on Thursday it has increased its provision of emergency funding to Greece slightly, though it declined to comment on when the Greek banking system might reopen.

He backed calls for Greek debt relief. “Nobody has ever disputed [debt relief for Greece],” he said.

“The issue is what is the best form of debt relief within our framework, within our legal institutional framework. I think we should focus on this point in the coming weeks.”

Asked about criticism of the actions of the ECB during the Greek crisis, its president said the biggest deposit flights had coincided with big political events such as January’s election and the collapse of bailout talks in June.

“So I find these observations that there wasn’t enough liquidity assistance or that there was a bank run caused by the ECB quite unwarranted, certainly unfounded,” he added.

He said the ECB’s provision of ELA was “never meant to be unlimited and unconditional”.

He said the Greek crisis had highlighted the need for further integration within the euro zone.

“This union is imperfect, and being imperfect is fragile, vulnerable and doesn’t deliver ... deliver all the benefits that it could if it were to be completed,” Mr Draghi said.

“The future now should see decisive steps on further integration.”

Meanwhile, European shares reached a six-week high on the back of the Greek vote, which saw 228 of the 300 MPs vote with the government.

With Germany due to vote on a third bailout package for Greece on Friday, Finland has already given parliamentary backing to the deal.