Greece hit with new conditions and no promise on debt

Analysis: Just because deal is the only one possible does not mean that it will work 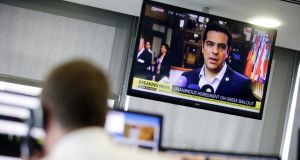 An employee speak on the telephone, as a television shows Alexis Tsipras, Greece’s prime minister, during a news broadcast from Brussels, on the debt package agreed for his country. Photograph: Bloomberg

Greece and the rest of the euro zone finally reached a deal, albeit that it was just one to enter talks on a new bailout, based on Greece meeting a range of pre-conditions. But did 17 hours of talking lead to a deal that might actually work? And what about the way the deal was argued over, and particularly the threat to Greece that it would have to leave the euro zone if it did not sign up, in some kind of “temporary” exit?

The small print of the deal will be argued over in the days ahead, but let’s stand back and look at one key point. Greece, we are told, is going to borrow another €80 billion plus under the programme – the numbers have not been finalised, but it will be somewhere in this ballpark. So a country with a debt to GDP ratio already around 175 per is going to take on more debt.

Now of course a lot of the new debt will be used to repay the old, but with a lot of money going in up-front, for example to recapitalise the banks, you would presume that Greece’s national debt burden will continue grow.

We will wait to see the detailed projections on this as the deal is worked out. The IMF, in particular, has made clear in recent weeks that it is worried about Greece’s debt sustainability – and no wonder.

Greece’s debt repayment schedule has already been spread out over a long period of years, meaning it is paying less as a percentage of GDP in annual repayments than the likes of Ireland and Portugal.

However such is the dire state of the economy that it needs further relief to give it a chance of returning to growth. And adding further debt now will make the sums harder in the years ahead, and also make it more difficult for Greece to have a credible financial position which will allow it to return to the financial markets at any stage in the foreseeable future.

The euro zone leaders specifically ruled out the idea of a debt “haircut” – in other words they will not write down the value of loans extended to Greece by the EU and IMF, which account for most of its national debt. The best Greece got was a promise , when the programme is first reviewed in a few months, to consider “if necessary, possible additional measures ( possible longer grace and payment periods) aiming at ensuring that gross financing needs remain at a sustainable level.” This would only happen if Greece fully implements what is agreed “in a possible new programme”.

So Greece was made to sign up to new conditions, without any explicit promise of debt restructuring. This may have reflected the power play in the room, but it is hard to see how it stacks up economically.

More cuts in spending and higher taxes will keep Greece’s domestic economy depressed. Its shattered banks will take months to be restructured. There was never going to be an easy way back for Greece, but a firm move to debt relief would at least have presented a decisive response to accept what is a reality. However European politics did not allow this to happen.

The political to-and-fro also involved a clear German threat to Greece that it would have to take a temporary “break” from the euro zone if a deal was not finalised, a threat still clearly in the air despite not being mentioned in the final summit communiqué.

This represents the first time that the issue that a country might have to leave the euro was formally floated at the highest level. It strikes me, to use an Italian cliché rather than a Greek one, that this is a crossing of the Rubicon, not only as regards Greece, but also the euro zone in general. Is the euro now an irreversible single currency, or some kind of arrangement countries can check out off if the find the going too hard?

As an alternative to this, Greece had to sign up to putting €50 billion of state assets in to a special fund, largely to help pay down debt in the years ahead. Again this was demanded as a sign of political “trust”, or lack of trust, but appears on the face of it to be something that Greece will never be able to deliver on the scale demanded.

Perhaps the deal that emerged was the only one that was possible among the 19 leaders.

But that does not mean it will work, or does not raise significant long-term issues for the euro, as well as of course for Greece itself.