Street protests as negotiations on a third bailout for Greece will take at least four weeks, eurogroup predicts

An Taoiseach Enda Kenny speaks to the media after 17 hours of talks during the Euro Summint, calling the experience 'pretty bruising'. Video: European Council

The IMF Managing Director Christine Lagarde says an agreement has been found on the Greece debt crisis. Video: Reuters 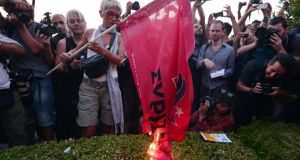 A woman burns the flag of the ruling party Syriza, while surrounded by journalists, in front of the Greek parliament in Athens during an anti-EU demonstration in Athens on Monday. Photograph: Louise Gouliamak/AFP/Getty 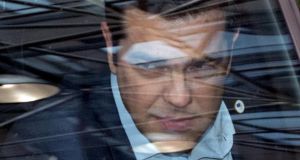 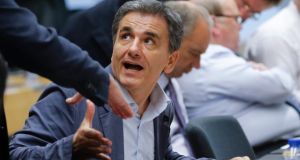 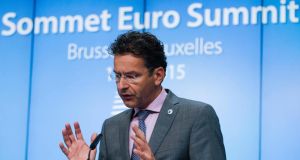 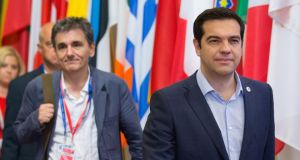 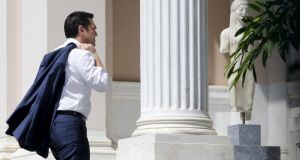 Greek prime minister Alexis Tsipras flew back to Athens today to try to ram a controversial bailout deal he secured from creditors through parliament, as anger mounted at more painful austerity measures that could fracture his government.

A sleep-deprived Mr Tsipras has until Wednesday night to quell dissent within his own ranks -- probably by sacking hardliners -- and get unpopular measures passed that include higher value added tax and pension reforms.

With dozens of potential rebels in the ruling Syriza party, Mr Tsipras will need the support of opposition legislators to pass the package, opening doubts over the stability of his government and raising the possibility that he could give way to a caretaker prime minister.

There were no details on when and how the reform laws would be tabled.

One obstacle could be the speaker, Zoe Constantopoulou, who is key to the logistics of the voting and who has been one of the creditors‘ fiercest critics.

One- potentially risky- move could be tabling a no confidence vote to sack her.

While there was relief that the country had escaped bankruptcy and a collapse of its banking system, Greeks vented their fury at an agreement that ended up much tougher than proposals they had roundly rejected in a referendum on July 5th.

Before the final contours of the deal were even known, one of his ministers railed against the deal as being “unviable“ and predicted there would be a snap election within months.

On the streets, reaction was equally blunt.

“Listen, it is some sort of victory but it is a pyrrhic victory because the measures are very strict,“ Marianna (73), said.

“People have suffered the past five years and there is more to come now. This is what makes things difficult for us. We wanted to stay in Europe, it goes without saying that we did. But what about the terms?“

Newspapers laced the morning‘s headlines with references to World War Two and railed against what they see as Berlin‘s attempts to humiliate Greece as punishment for its resistance to another round of cuts.

“Germany unfortunately for a third time in 100 years is attempting to destroy Europe,“ Nikos Filis, the parliamentary spokesman for Syriza, said on local television.

“Germany attempted to bring the Greek government down and take Greece outside the euro zone,“ he said.

“We had the illusion that democracy works in Europe when it comes to relations between the nations.“

In particular, Greeks bristled at Mr Schaeuble‘s proposal- not included in the final deal- for a temporary Greek exit from the euro zone, which many saw as tantamount to expulsion by stealth.

The German occupation of Greece during the war has become a recurring theme during months of increasingly fractious bailout talks between Athens and its creditors.

Negotiations on a third bailout for Greece will take at least four weeks, the head of the eurogroup predicted on Monday though he warned that the Greek parliament must first pass reform measures before a bailout will be considered.

Speaking this evening in Brussels after three days of marathon meetings in Brussels, Jeroen Dijsselbloem welcomed the decision by euro zone leaders to give the green light for a third bailout for Greece pending the implementation of reform measures in Athens.

He said that the question of trust had been at “the heart of the intensive discussions” on Greece over the last few days.

“Over the course of the last months, and particularly around the referendum a lot of trust had been lost... it has to be rebuilt,” he said.

The Greek Parliament has been tasked with legislating for a raft of reforms by Wednesday as a precondition for euro zone member states to start discussions on a third bailout that could be as high as €86 billion.

Despite reaching agreement on Monday morning, a number of ministers warned that further steps need to be agreed before discussions would commence.

The German Bundestag could be recalled to vote on the proposal by Friday. Speaking this morning, German chancellor Angela Merkel said she could recommend “with full confidence” that the Bundestag authorise the opening of loan negotiations with Athens once the Greek parliament has approved the entire program and passed the first laws.

Earlier today, a deal with Greece was clinched after a whole night of haggling at an emergency summit.

A meeting was chaired by eurogroup president Jeroen Dijsselbloem in Brussels Monday evening.

Later today, the ECB is expected to decide whether to increase emergency liquidity assistance to Greek banks which have been closed for two weeks.

The Greek parliament must pass the agreed reform measures by Wednesday but the tough conditions imposed by international lenders led by Germany could bring down prime minister Alexis Tsipras’ leftist government and cause an outcry in Greece.

‘No winners and losers’

Asked about criticism of the approach taken by the lenders over the last twenty-four hours, European Commission president Jean-Claude Juncker said there were “no winners and losers” in the deal.

“I said before the referendum that the situation would be worse after the referendum, this has proven to be true,” he said, noting that a compromise had been reached.

He also expressed confidence that the Greek government would be able to pass the deal.

“I am convinced that the Greek government will be able to pass all the decisions that have been taken today,” he said.

Speaking after the deal was agreed Mr Tsipras said Greece had faced hard decisions and tough dilemmas and that he had taken responsibility to avert the extreme plans of conservative circles.

However, even before the final terms were known, his labour minister went on state television to denounce the agreement.

EU officials said Mr Tsipras has finally accepted a compromise on German-led demands for the sequestration of Greek state assets to be sold off to pay down debt.

The Greek leader is also reported to have dropped resistance to a full role for the International Monetary Fund, which German chancellor Angela Merkel has declared essential to win parliamentary backing in Berlin.

However, in a sign of how hard it may be for Mr Tsipras to convince his own Syriza party to accept the deal, Labour minister Panos Skourletis said the terms were unviable and would lead to new elections this year.

Speaking after the meeting, Taoiseach Enda Kenny said the negotiations had been “bruising” but welcomed that the basis for a third agreement had been reached.

“This has been a pretty bruising experience over the last period, but what it has allowed for is the basis for a third agreement for Greece, which will allow for the Greek economy to thrive and prosper and continue to remain a member for the euro zone,” he said.

He said the involvement of the IMF in a programme and the establishment of a €50 billion fund had been the main sticking points during the discussion.

Mr Tsipras will now have to rush swathes of legislation through parliament this week to convince his 18 partners to release bridging funds to avert a state bankruptcy and just to begin negotiations on a three-year loan.

If the summit had failed, Greece would have be staring into an economic abyss with its shuttered banks on the brink of collapse and the prospect of having to print a parallel currency and in time exit the European monetary union.

Six sweeping measures including spending cuts, tax hikes and pension reforms must be enacted by Wednesday night and the entire package endorsed by parliament before talks can start, the leaders decided.

In almost the only concession after imposing a tough set of terms on Mr Tsipras, Germany dropped a proposal to make Greece take a “time-out” from the euro zone that many said resembled a forced ejection if it failed to meet the conditions.

The draft document for talks on a third bailout had made IMF participation a precondition.

Another sticking point had been a proposal to transfer €50 billion worth of assets to an external, independent fund to allow for future privatisations. It is understood Mr Tsipras suggested a maximum of €17 billion in assets could be identified. It is unclear how this issue has been resolved.

Other proposed measures included: a streamlined VAT-collection system and broader tax base; cuts to improve the pension system’s sustainability; a civil code overhaul to speed up trials and cut costs of legal action.

To prevent a repeat of previous stand-offs, a new programme would oblige Athens to submit draft legislation to its creditors before parliament.

In a final, provisional, line an earlier draft document said failure to reach agreement would see Greece offered “swift negotiations on a time-out from the euro area”.

However, it is understood other countries, including Ireland, were against this line being included in any final agreed document.