German Chancellor Angela Merkel warns of chaos if lawmakers do not give her government backing to start negotiations on a third bailout programme for Greece. Video: Reuters 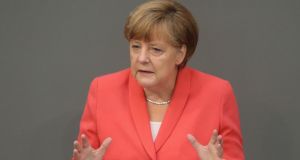 Germany’s Bundestag has mandated Berlin to join talks on a third bailout for Greece, after Chancellor Angela Merkel warned that the outcome will determine European cohesion and the continent’s ability to deal with looming global challenges.

After a heated debate, some 439 MPs approved of giving a mandate, 65 short of the government majority; 119 MPs voted against while 40 abstained.

Some 598 votes were cast out of a total of 631 seats in parliament.

The vote came after a heated debate when opposition politicians said it was a “scandal” that Berlin had threatened Greece with its ejection from euro and was now “destroying Europe” by forcing Athens, as a condition of €86 billion loans, to accept the “de facto abolition of parliamentary democracy”.

Before the vote, the German leader warned would-be rebels it would be “grossly negligent” to pull the plug on Greece crisis, given the far-reaching consequences for the European integration project.

“This is a decision for a strong Europe and a strong eurozone.”

Ms Merkel said the bailout roadmap that had emerged from weekend talks was “tough, no question”.

But it was not just hard for Athens, she said: it was hard for creditors who have to convince their voters why they back further assistance for Greece.

After five years of failing to meet its reform promises, she said Greece’s creditors would be watching carefully this time to ensure that the “unprecedented European solidarity” was met with implementation and not mere declarations of intent.

In her address Ms Merkel defended a German proposal - eventually dropped - to offer Greece a “time-out” from the eurozone to restructure its debts.

“A time-out cannot be decided against Greece but together with it and the other 18 euro members,” she said. “Neither Greece nor the others were prepared for this, thus it was not considered.”

Amid ongoing concerns about the sustainability of Greek debate, she warned that, as long as Greece remained inside the currency bloc, debt write-downs - so-called haircuts - were impossible because they would breach German constitutional court rulings that limit Berlin’s bailout participation.

“Haircuts would be the end of the euro as a legal union and, with us, is not to be done,” she said.

Leading the attack, opposition leaders in the Linke - an ally of Syriza - accused Ms Merkel and her finance minister, Wolfgang Schäuble, of “making the biggest mistake of your political careers”.

His deputy, Sahra Wagenknecht said the core of the current tragedy lay in 2010.

“It lay in your decision to load bank debt on the shoulders of taxpayers to prevent losses at German and French banks,” she said.

“And you call this solidarity.”

“Greece has to change dramatically to get out of this crisis,” he said, saying the country’s “irresponsible elites” and clientelist culture had created a haven for the “super-rich”.

Mr Schäuble made no mention of his own doubts about a third bailout programme for Greece in his Bundestag address.

A day after suggesting on radio that a Grexit and debt writedown was the “best way” for Greece, he described a third bailout as “the last attempt to achieve this extremely difficult task”.

But he conceded that talks would have to find a way to bring Greece’s debt to a “realistic” level, with or without a debt haircut.

“I ask you to vote in favour,” he said. “We believe that there is a chance to bring these talks to a successful conclusion.”

The polarised Bundestag debate reflected public opinion: a German public television poll shows that 49 per cent of Germans are opposed to further talks with Greece, with 46 per cent in favour.

According to the Infratest/Dimap poll, some 68 per cent of respondents blame Athens for an escalation of the standoff with Greece, 24 blame all sides equally and 4 per cent other euro countries.

An overwhelming 85 per cent believe Greece will be a long-term dependent on EU financing .

The Bild tabloid, a long-time opponent of Greek bailouts, presented seven reasons to vote no to third bailout talks including: Greece has “exhausted European trust” and “our grandchildren will pay”.

Europe came close to catastrophe as the talks between Greece and its creditors for a new bailout deal last weekend almost failed, European Council chief Donald Tusk said in an interview with a Greek newspaper published on Friday.

After 17 hours, the two sides finally struck a deal in the early hours of Monday morning, staving off financial meltdown in Greece and a likely exit from the euro zone currency bloc.

Mr Tusk said Ms Merkel and Greece’s prime minister Alexis Tsipras had haggled over how much money from a Greek privatisation fund would be earmarked for investment.

“During the negotiations, around 0700 in the morning, when Tsipras and Merkel asked for a break, I felt that the risk that they would fail was very close,” Tusk told Kathimerini.

“At that time their difference was only €2.5 billion,” he said. “It was at that point that I told them that if the negotiations had ended without a result, I would have been ready to announce publicly that Europe was close to catastrophe for €2.5 billion.”

Europe has moved to reopen funding to Greece after the parliament in Athens approved a new bailout programme in a fractious vote that left the government without a majority.

The European Central Bank increased emergency funding for Greek lenders, although capital controls will have to remain in place to avoid a run on the banks when they reopen on Monday.

Plans for a new bailout are expected to be approved in the German Bundestag on Friday, despite mounting opposition by Greece’s biggest creditor to giving Athens more money.

“The most important thing in the negotiations was to help Greece. However, we had to discuss the medium and long-term consequences of a Grexit as a chaotic and unpredictable procedure with political and geopolitical impact,” Mr Tusk said.

“It was a necessary solution to avert the risk of immediate chaos and default but it’s just the first step,” he said.