Greece and its international lenders clinched a multi billion-euro bailout agreement on Tuesday after marathon talks through the night, officials said, boosting hopes aid can be disbursed in time for a debt repayment due in days. Video: Reuters 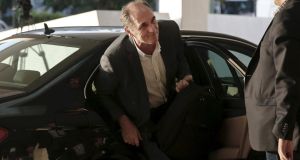 Greek economy minister George Stathakis arrives for a meeting with representatives of the International Monetary Fund, the European Commission, the European Central Bank and the eurozone’s rescue fund, the European Stability Mechanism, at a hotel in Athens. Photograph: Alkis Konstantinidis/Reuters

Greek government sources say that following all-night talks, Greece and its creditors have reached an agreement on third bailout, in an accord which will keep the country in the eurozone and avert bankruptcy.

“An agreement has been reached. Some minor details are being discussed right now,” a Finance Ministry official told reporters after marathon overnight talks between Greece and lenders in Athens.

Finance minister Euclid Tsakalotos took part in the talks at a central Athens hotel and told reporters a deal was “close”, with “two or three small details” to be ironed out.

Similarly upbeat remarks came from government aide Theodoros Mihopoulos, who said on Twitter that the negotiations had been completed and that “some details remain”.

While details of the final deal are yet to emerge, it is understood that overnight, negotiators focused on details, including Greece’s fiscal outlook and the size of the total bailout, which may end up slightly higher than the €86 billion envisaged.

Discussions with the institutions were “going fairly well,” finance minister Euclid Tsakalotos told reporters in Athens late on Monday, according to a transcript e-mailed by his ministry.

“There are questions and issues they want to discuss again and again, but I think there should be optimism that we will soon have a deal,” he said. “I don’t know if it will be achieved by tomorrow morning, but soon.”

Prime minister Alexis Tsipras’s government needs a quick release of at least €20 billion just to create a buffer for its banks and to make loan repayments.

If the deal is agreed, Greece’s parliament must then pass the measures required by creditors - the ECB, the International Monetary Fund, the European Commission and the European Stability Mechanism rescue fund - before a meeting of euro-area finance ministers tentatively scheduled for Friday.

Steffen Seibert, German chancellor Angela Merkel’s chief spokesman, told reporters in Berlin on Monday that a rapid conclusion of the negotiations on a third rescue was “desirable,” even as he said that any deal must be thorough rather than rushed.

Dr Merkel is due back from a three-week vacation to preside over a cabinet meeting in Berlin on Wednesday that will probably deal with progress in Greece.