Fintan O’Toole: Europe divided by a sense of crisis and a sea of amnesia 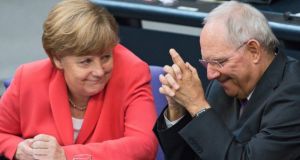 There is no euro zone crisis. It’s impossible to understand what’s going on now if you start out with the assumption that there is a single community of nations experiencing the same historic moment. There isn’t. If, for example, Germany seems detached from the sufferings of the more peripheral euro-zone countries, it’s not because Germans are hard-hearted. It’s because their own current experience is not of crisis but of bonanza. The euro may look like a disastrous project for Ireland or Greece but in Germany it’s an enormous success. The German branch of the consultants McKinsey calculated the economic benefits of the euro’s first decade when the currency had 17 members. Those benefits were divided 50/50: half went to Germany, the other half to the remaining 16 countries.

Those were the good years, but what of the euro’s bad times? For Germany, they don’t exist. The euro’s weakness has been a jackpot for Germany. It has made German exports, especially to China and the US, much cheaper than they would have been otherwise. In 2014, total German exports swelled to €1.1 trillion, with an 11 per cent rise in sales to China and 6.5 per cent to the US. Even the Greek crisis has been fabulous news for Germany’s finances. The longer the crisis goes on, the more investors sail to the “safe haven” of German government bonds and the more Germany saves on the costs of borrowing. This year alone, Berlin has saved an estimated €20 billion in borrowing costs because of the Greek crisis. It would be cynical to suggest that Wolfgang Schäuble as finance minister has an interest in keeping the threat of Grexit alive (as he did again last week), but in terms of hard cash, he does.

All of this has many implications but one of them is that, as Hamlet put it, the time is out of joint. There is a complete disjunction between what “now” means in Germany and in much of the rest of the European Union. Germany’s now is not Ireland’s now or Portugal’s now or Italy’s now. This is not a moment in European history – it is at least two parallel moments, one of loss and anxiety, one of economic and political triumph. And in this divergence something crucial is lost – a sense of history itself. When the present means such different things, the past loses its meaning too.

There are two big problems with this. One is that it is, aptly enough, itself a case of recent history repeating itself. The great delusion that overtook economic orthodoxy in the 1990s was precisely that “historical comparisons” had been rendered redundant by the rise of a new form of super-efficient finance capitalism. The slogans of that time – “this time it’s different”; “the end of boom and bust” – were intended to teach us that history had nothing to teach us. The past consequences of deregulated, feral capitalism were irrelevant. And that worked out well, didn’t it?

The other problem is that Merkel’s amnesia doesn’t extend merely to Versailles or to the elimination of Germany’s debts in 1953. Even more recent history is forgotten – including the history of the euro itself. It is forgotten that it was Germany that overruled Jacques Delors’s plan for a euro zone that would include fiscal transfers between its member states. It is forgotten that the underlying assumption of the euro was, as Andrew Moravcsik epitomised it, that “the deficit-prone countries of southern Europe would adopt German economic standards – lower price inflation and wage growth, more saving and less spending – and Germany would become a little more like them, by accepting more government and private spending, as well as higher wage and price inflation”.

The result is that we have one part of the euro zone all too aware that it is living at a moment of historic crisis and another – the one that calls the shots – floating along on a sea of amnesia. And this is deeply dangerous for the European Union. It was founded on a sense that its members shared a common, and disastrous, history, a past that must never be repeated. It could flounder on the growing sense that history is only for the losers.