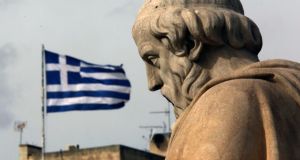 With Greece facing a €3.5bn payment to the ECB on Monday, creditors are racing to devise a plan to provide fast cash to the struggling economy to avert full- scale default

Euro zone finance ministers will hold a conference call this morning in the wake of last night’s vote in the Greek parliament on reform measures demanded by creditors, though significant divergences remain among member states about how to tackle Greece’s short- term financial needs.

With Greece facing a €3.5 billion payment to the European Central Bank on Monday, creditors are racing to devise a plan to provide fast cash to the struggling economy to avert full- scale default.

Announcing the proposal yesterday, commissioner Valdis Dombrovskis admitted non- euro area member states had “expressed concerns” and said other options were also under consideration including the use of Greek SMP funds held by the European Central Bank (ECB).

He also said that consultations were ongoing about collateral for any funds that are used.

“It’s important that Greek financing is in place, really by the time the ESM programme is in place, [so] Greece can finance its current payments and also finance arrears to the IMF, because this is a precondition for the IMF to engage in a third programme,” Mr Dombrovskis said, adding the need for further bridge financing would depend on how quickly a decision on an ESM programme could be taken.

The €7 billion “bridging loan” proposed by the commission will have a three-month maturity. As well as meeting its everyday financing needs, Greece is also facing a further €5 billion in repayments to the ECB next month.

With Greek banks now closed for more than two weeks, the ECB governing council meets for its regular rate-setting meeting in Frankfurt today. The ECB has frozen the amount of emergency liquidity assistance it is providing to Greek banks at just under €85 billion, effectively prohibiting the banks from reopening.

French economy minister Emmanuel Macron said yesterday that Greece would need debt relief eventually, but it was not “politically possible” to reduce the debt in the short term.