Greeks face reality as pharmacies are closed and train drivers strike over further austerity measures, ahead of a crucial vote in the country's parliament on whether to accept the conditions of a third bailout package. Video: Reuters 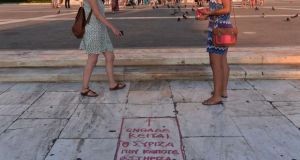 Women stand by a slogan written on the pavement reading ‘Here lies Syriza, the party I once supported ‘ in front of the Greek parliament in Athens. Photograph: Louisa Gouliamaki/AFP/Getty Images

The European Commission has proposed a €7 billion bridging loan for Greece to help the country make its immediate financial commitments, including a €3.5 billion repayment to the European Central Bank due on Monday.

Announcing the proposal in Brussels, European Commissioner Valdis Dombrovskis admitted that “non euro area member states have expressed concerns” and said that other options were also under consideration

The decision was announced despite significant opposition from Britain about contributing to any short term financing package for Greece.

All 28 EU member states, including Britain, have contributed to the EFSM fund.

Speaking in Brussels on Monday, British Chancellor George Osborne outlined Britain’s opposition to using the fund to provide short-term loans to Greece. “Britain is not in the euro, so the idea that British taxpayers will be on the line for this Greek deal is a complete non-starter. The euro zone needs to foot its own bill.”

The loan will be “linked to economic policy conditionality” the Commission said today in a statement.

The announcement of a bridge loan package comes amid continuing tensions between the International Monetary Fund (IMF) and Greece’s European lenders about a third bailout package for Greece.

Euro zone leaders meeting on Sunday said Greece needs a bailout package of between €82 billion and €86 billion over the next three years.

The IMF warned on Tuesday that Greece will need significantly more debt relief than was envisaged by its European lenders, raising doubts about its participation in a third bailout package for the indebted country.

A confidential updated debt sustainability analysis by the IMF found that the dramatically deteriorating economic situation in Greece meant that lenders must consider further debt reduction mechanisms, such as a 30-year grace period on servicing its European debts.

Speaking on Monday in Brussels, the head of the ESM fund, Klaus Regling said he expected the IMF to contribute to any third bailout package for Greece, once Greece’s arrears with the Institution had been paid.

Yesterday, the Fund confirmed that Greece had missed a €456 million payment on Monday, bringing its total arrears to the IMF to €2 billion, following its missed payment on June 30th.

Mr Tsipras is facing a revolt in his left-wing party and strike calls from workers as he battles to win a parliament vote on a bailout deal to prevent the country’s economy from collapse.

But the Greek prime minister must now keep his own government from collapsing as he tries to push through a deal that he calls “irrational”.

Hardliners in Mr Tsipras’ own cabinet and his radical leftist Syriza party are in open revolt and unions are calling for or extending strikes to coincide with the vote.

Greece faced this year’s first bailout deadline back in February. Minister for Finance Michael Noonan has said it could have found itself in a much better situation now had it clinched a deal back then, but Greece got its timing wrong during the bailout negotiations.

“From an economic, financial and social point of view it was an absolute disaster, because we all know in democracies that political success and economic success go hand in hand.”

After a stunning win in a referendum that rejected calls for more austerity, Mr Tsipras agreed this week to tough new measures that mean economically-battered citizens will pay more for most goods and services by the end of the week.

The bill is expected to pass with votes from opposition parties. But the Tsipras government’s political survival could be in danger if large numbers of its own MPs resign their seats or openly vote against the bill.

Mr Tsipras vowed that he would not step down despite the open dissent. He criticised the deal, but said it was the best Greece could get.

“The policies imposed on us were irrational,” he said. “We faced a tough and punitive position from our partners. But the (agreement) does offer a way out of the crisis.”

On Tuesday the IMF said Greece’s finances were even more dire than previously reported. It said Greece’s debts would peak over the next two years at 200 per cent of the country’s economic output — earlier it had said the debt burden would peak last year at 177 per cent.