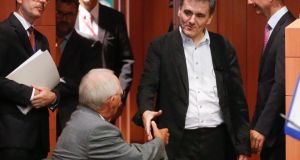 Jeroen Djisselbloem, chairman of the 19-nation Eurogroup, said that “of course there were differences but we have managed to solve the last issues”. Ten billion euro will be made available to recapitalise Greece’s banks.

A second slice of €16 billion will be paid in several instalments, starting with €13 billion by August 20th when Greece must make a new debt payment to the European Central Bank. “On this basis, Greece is and will irreversibly remain a member of the euro area,” European Commission president Jean-Claude Juncker said after the deal was sealed. The final rescue package would eventually give Greece up to €86 billion in loans over three years in exchange for harsh spending cuts and tax hikes.

The deal must still be approved by some national parliaments, including Germany, but that is largely considered to be a formality. The move saves Greece from a disorderly default on its debts which could have come as soon as next week and helps to cement its membership of Europe’s single currency, but means more hardship for ordinary Greeks.

The approval came after Greece’s parliament passed painful reforms and spending cuts after a marathon overnight session that divided the governing party, raising the spectre of early elections.

The bailout bill passed through the Greek parliament thanks to support from opposition parties, with 222 votes in favour, 64 against, 11 abstentions and three absent in the 300-member parliament.

Although approved by a comfortable majority, the result was a blow to Prime Minister Alexis Tsipras, who saw more than 40 of his 149 radical-left Syriza party lawmakers vote against him.

He has come under intense criticism from party hardliners for capitulating to the creditors’ demands for budget cuts — austerity measures he had promised to oppose when he won elections in January.

State television said Mr Tsipras was expected to call a vote of confidence in his government, but that was not confirmed. Government spokeswoman Olga Gerovasili said any action would come after August 20th.

Addressing MPs at the end of the bailout vote, Mr Tsipras described the €86 billion agreement with creditors as a “necessary choice” for the nation.

“Faced with an ultimatum for Greece’s temporary exit from the euro, we assumed our responsibility towards the Greek people to stay alive and keep on fighting, rather than choose suicide.

“I don’t regret that I fought like no one before me in order to defend the rights of the Greek people, nor that I chose compromise over the heroic Dance of Zalongo,” he said, referring to a the mass suicide of women during a rebellion against the Ottomans in 1803.

After defeating conservatives in January, Mr Tsipras remains hugely popular for standing up to Germany’s insistence on austerity before capitulating to new bailout terms under the threat of a euro zone exit. He would be expected to win again if snap polls were held now. – (Reuters)