Eurocrisis has exposed incompatible thinking on crucial question: what should a state do when its private economy hits the skids? 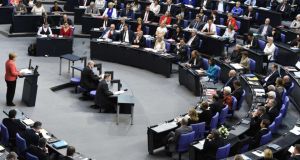 Berlin will only act if the verbal Molotov cocktails stop flying in its direction ... Chancellor Angela Merkel gives a speech during a special session at the Bundestag on new Greek bail-out deal. Photograph: Tobias Schwarz/AFP/Getty Images

What have I learned from the euro crisis? Sitting up all night this week in the European Council press room I had plenty of time to think about the answer.

Like many, I know more than I ever wanted to know about sovereign bonds. I have learned the Greek words for yes and no, and how little they now mean, along with the words “crisis”, “deal” and “breakthrough”.

As Sunday night turned to Monday morning, I kept myself awake by studying the polarised news coverage of this umpteenth crisis summit from around the continent. Reading such radically different takes on the same event, I realised that I now I know how wars start.

Wars start when politicians simplify a complex, multinational crisis into a nationalist us-or-them narrative; when banks nationalise their losses, setting peoples against each other; when journalists, egged on by social media, embrace jingoism instead of balancing argument and counter-argument; and when people don (digital) blinkers and inform themselves exclusively with news and views matching their own.

As in any family, the EU’s endless rows over money have hardened hearts and polarised opinion. One half blames Germany for imposing a vicious circle of austerity and recession on Greece that is now a humanitarian crisis; the other side sees the root of Greece’s problems in home- grown corruption and opportunism.

EU member states are now arguing past each other and the continent is a place where others’ arguments and experiences are rubbished or ignored, a place where I am completely right and you are completely wrong. I am the victim here, you are the perpetrator.

After the all-night session ended on Monday, it didn’t take long for both camps to tear the deal apart – for different reasons. One side called it a blueprint of German bullying, copper-fastening Berlin’s dominance in the EU. The other camp around Germany attacked the deal as a further sell-out of the no-bailout promise on which the euro was sold to voters. Depending on where you live in the EU, however, you’ve only heard one side of the argument. And that is the nub of this problem .

Underpinning one-sided argument has been inflammatory language from even the least likely suspects. The Guardian quoted an unnamed EU official who compared closed-door talks between Angela Merkel and Alexis Tsipras as “mental waterboarding”. The Guardian’s correspondent conceded to me the official was neither present at talks nor had ever, to his knowledge, experienced simulated drowning. But “EU official” sounds official and the quote developed legs .

Germany officials dismiss this, saying the majority of the euro group shares their views.

Where Athens and Berlin both fall down is in a shocking lack of self-awareness of their actions. After five years enjoying the wrong kind of attention, it’s not helpful to dub your creditors “terrorists”, then launch into another all-nighter in Brussels. On the other side, it’s one thing for a country like one of the Baltics to threaten Athens verbally with Grexit behind closed doors, and quite another when it is Germany making the threat in writing, leaked to a newspaper.

Everyone has their own reason why the euro is in trouble. Some blame leaders for creating an inherently political currency, a monetary union without a fiscal steering wheel. Others resent the “one-size-fits- none” interest rate issue, robbing capitals of tools to tweak their economy.

But the euro crisis has exposed incompatible thinking on a crucial question: what should a state do when its private economy hits the skids? Stimulate now and save later, as one camp’s economic tradition suggests? Or, as the other believes, prune the economy first, then stimulate carefully? Each approach has worked in different contexts, but no side is willing to concede this point.

Born out of political idealism, the euro is dying from economic dogmatism – on all sides. But in this dialogue of the deaf, you may not have heard this.

It’s staggering to watch Berlin look on, acting like an observer and not a participant, as Greece disintegrates, families face ruin and Molotov cocktails fly.

But Berlin will only act if the verbal Molotov cocktails stop flying in its direction. Accusations and insinuations that Berlin is pursuing a Fourth Reich are a disgrace to victims of Nazi crimes and hurtful for ordinary Germans. In official eyes, Nazi comparisons discredit those making them and their arguments, and catalyse Berlin’s determination to carry on regardless, ignoring all red lights and stop signs.

In this crisis pressure cooker, with matters disintegrating by the day, urgent de-escalation measures are needed. Parallel to the technical tug-of-war we need two credible countries to cool the atmosphere. Why not France and Ireland?

Once tempers are cooled, however, the time has come to pose the all-or-nothing question: how much EU do we want? After years of crisis, the answer may well be: not very much, thank you.

The EU could return to its pre-crisis “community method”, refereed by the European Commission, and long considered a better guardian of smaller countries’ interests.

For that to happen, however, member states need to give the commission competence over issues we’ve squabbled over in the crisis. As it stands, these issues are the exclusive preserve of member states and the member states at the European Council.

If you are still in favour of the EU and the euro, but want a more European and less national approach than we’ve had in the last five years, do you want further political and fiscal integration to allow this? Is Ireland then prepared to slaughter the holy cow of its corporate tax rate?

Finally, it’s time to take back the EU debate from the silver-tongued populists who, for four years, have offered the same, appealingly easy answer (“It’s the Germans”) to every question in this crisis.

If you are a beneficiary of the EU – doing business, studying or living in another European country – this is your chance to speak out.

It may be your last.