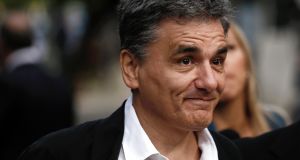 Greece’s finance minister, Euclid Tsakalotos, said he expects to open negotiations on debt relief by the end of the year. Photograph: Kostas Tsironis/Bloomberg

Greek finance minister Euclid Tsakalotos will meet his euro zone counterparts next Monday for the first time since his country’s September 20th general election. The current state of play regarding the Greek bailout is expected to feature at the scheduled Eurogroup meeting in Luxembourg, as finance ministers turn their minds to the next bailout review originally scheduled for October, but now expected to take place in November.

The last few months have seen the Greek bailout crisis slip away from international attention, as the world’s eyes focused on the refugee crisis. But the issue has not gone away.

Ten days ago Greek voters went to the polls in their fifth general election in six years. Despite polls indicating a surge in support for the centre-right New Democracy, Syriza won 35 per cent of the vote, slightly lower than its victory in January, but decisive nonetheless. The election of a new coalition between Syriza and the Independent Greeks – effectively a return of the political status quo – has reassured markets. Moody’s this week revised upwards its outlook on Greek sovereign debt to “stable”.

While Syriza’s victory may reflect an ever-deepening public frustration with the country’s two traditional parties, it is also a remarkable personal feat for Tsipras given that the left-wing leader has signed up to an onerous bailout agreement that he previously vowed to reject.

Nonetheless, significant challenges exist for the Greek government as it settles into its new term and prepares for three years of stringent monitoring by the IMF, European Commission, European Central Bank and the European Stability Mechanism (ESM).

In the short-term the focus will be on the government’s implementation of the terms of the bailout agreement. In a sign that Tsipras’s government is prepared to comply with creditors’ demands, on Monday the government announced that it will abolish the contentious reduced VAT rate which applies to six of the islands, with more islands entering the scheme in 2016 and 2017. The finance ministry described the move as a “political necessity, not a choice” but the concession on VAT– a key issue during the bailout crisis – illustrates how far Syriza has shifted from many of its original positions.

Further reductions to pensions will be even tougher to implement, though there may be room for compromise for the government. Similarly, Greece faces pressure to accelerate the pace of privatisations, though the ongoing dispute between energy minister Panos Skourletis and a Canadian mining company about mining rights does not bode well for progress on the privatisation agenda.

The situation of the banks is also a serious concern. With capital controls still in place, the Greek banking system remains in a precarious position. Deposits are down about 25 per cent since the beginning of the year, while the market value of the four big banks is 70 per cent lower than in January when Syriza came to power. The ECB is currently undertaking an asset quality review and stress tests of the banks, but fears that the capital shortfall revealed by the tests could be larger than anticipated sent bank stocks sharply lower earlier this week.

While the results of the bank stress tests are likely to occupy minds before the first bailout review, the next issue on the agenda will be debt relief. The finance minister said this week that he expects to open negotiations on debt relief by the end of the year.

At the very least, debt restructuring will be on the cards, but there is significant support for a debt writedown, including from the centre-left Socialist and Democratic group in the European Parliament. The shape of such a deal is likely to be the next big political battle of the Greek crisis.