Cliff Taylor: Ireland, the message was unambiguous, you are on your own

The euro will always have a hard core. In Premier League terms, Germany, France and the Netherlands will be the Arsenal, Chelsea and Manchester United 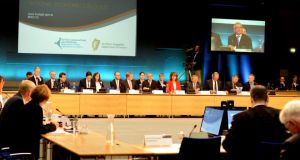 You’re on your own. That is the message for Ireland and other smaller member states from what has happened in Greece. If you get into trouble, Europe may be prepared to bail you out, but only on its terms. We knew the price of a bailout ourselves, of course, though there was talk that after the crisis Europe had strengthened its defences and put in place new rescue mechanisms for countries in trouble and their banks.

However as we have seen over the past week, it is far from “all for one and one for all”. In fact, the clear message from Germany and its allies is that a high price will be demanded for those who need assistance. The cost of availing of the new post-crisis rescue mechanisms is high.

Last weekend was a chaotic mess, a complete and utter shambles. It emerged with a plan which, immediately after it was agreed, was deemed unsustainable by the IMF, unwelcome by Athens and unviable by just about everybody else.

Greece is bust and the plan drawn up fails the first test of a bailout. This is that it must be decisive and give the country involved a chance to turn the momentum back in its favour, if not immediately, then over the next couple of years. Greece can never return to the markets with a debt level approaching twice its annual GDP.

Even Germany agrees that Greece’s debt is unsustainable – but it does not want countries to start fundamental write-offs within the euro zone. So this is all about precedent and politics and the way the euro zone will operate in future.

Germany does not want the rest of Europe living off its credit card. It went through a full monetary and budget integration once – with the former East Germany, at a considerable cost. It does not feel it has signed up to do it again, as Angela Merkel’s government makes quite clear. Whatever the criticisms of its malign tactics last weekend, this is entirely understandable.

Whether Greece ends up inside or outside the euro, the floating last weekend by German finance minister Wolfgang Schäuble of the possibility of a country leaving the euro – even dressed up as a temporary measure – sends out a message to the markets. It is that the euro is not forever unbreakable.

The euro will always have a group of core members. In Premier League terms, Germany, France and the Netherlands will be the Arsenal, Chelsea and Manchester United – or the Kilkenny, Tipperary and Cork if you prefer hurling. They will always be in the top division.

But those who run up large deficits and debts will, when trouble hits, face the spectre of relegation, the “temporary” exit. They will pay for it in the costs they are charged to borrow from the markets and could face speculative pressures on their bonds if another recession arrives. Or, worse, they could face destabilising pressure on their banking system. Then there will also be a group in the middle – not big enough to borrow at German rates, but seen as financially sound.

The message for smaller states like Ireland is clear – and perhaps this is also part of what Germany intended last weekend. It is now imperative to get your national debt and your annual borrowing to a position where they are clearly sustainable – and to have enough leeway if another recession hits. The price of being in the relegation zone, if any doubt at all hangs over your euro membership, will be paid in much higher national borrowing rates and ongoing uncertainty. And the price of being bailed out is enormous.

This does not mean fresh tax hikes and spending cuts or more “austerity” are needed from Ministers Michael Noonan and Brendan Howlin in the budget. It just means making budget decisions on the basis that our debt and borrowing are still too high. It means making cutting debt and the deficit the priority, rather than doing just enough to stay within the euro zone budget rules.

Unfortunately the long lines of lobbyists and interest groups at the national economic dialogue this week – all looking for more – suggest that this is not the way Ireland operates. Everyone smells money and the Government, facing an election, is under pressure to deliver. If growth remains strong for the next few years it may all work out but the lesson of the Greek crisis is that it simply isn’t worth taking the risk.