Bundestag backs third Greek bailout as IMF yet to decide

German parliament votes in favour of third bailout package for Greece, with a total of 454 lawmakers voting for the proposal. Video: Reuters 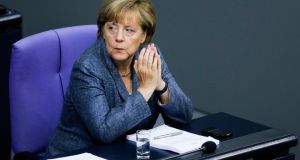 German Chancellor Angela Merkel at the German parliament prior to a vote on another bailout package for Greece, in the German Bundestag in Berlin. Photograph: AP Photo/Markus Schreiber

Chancellor Angela Merkel was given a welcome shot in the arm in Berlin after the Bundestag backed joining a third loans-for-reforms programme for Greece worth €86 billion.

Expectations of a rebellion in her Christian Democratic Union (CDU) fizzled out after a lively two-hour debate, when 454 MPs backed the programme – 15 more MPs than backed opening talks on a programme a month ago.

During a test vote on Tuesday night, that number had dropped to 56. The full breakdown of the vote will be available this afternoon.

Ahead of the vote, German finance minister Wolfgang Schäuble admitted he had “struggled no less than others” with the idea of further loans for Greece during recent months dealing with the Syriza-lead government.

But he had changed his mind in light of a growing readiness of Athens to embrace reform and that the Greek parliament had already passed reforms in advance – so-called “prior actions”.

Thus, “with full conviction” he asked MPs to back his ministry’s proposal.

“Given experiences of last months and years there’s no guarantees that this will all work, but it would be irresponsible not to use this chance for a new start in Greece,” he said.

Chancellor Angela Merkel didn’t address the Bundestag ahead of the vote. But at a Christian Democratic Union (CDU) parliamentary party meeting on Tuesday evening, she heard a volley of complaints from party rebels that the third programme would be as ineffective as the previous two and merely increased the financial exposure of German taxpayers.

Dr Schäuble’s doubts only added fuel to the flames of frustration among CDU backbenchers, under pressure in their constituencies to justify further Greek loans. But the finance minister’s rowback on Tuesday appeared to have doused the flames and held the CDU rebellion in check.

With the IMF has yet to decide whether it will participate in a third package, another cause of unease for German government MPs, Dr Schäuble said he was “very confident” the Washington-based fund would come back on board in autumn after the EU and IMF would reach a “joint ruling on debt sustainability”. But he said it was the widespread view of euro members that debt write-downs were at odds with the European treaties.

Mr Gregor Gysi, floor leader of the opposition Linke, pounced on the stand off with the IMF as proof that the third Greek programme was another step in the wrong direction.

Berlin faced a “conflict of interest” in the coming months, he said: without real debt relief for Greece, he said, the IMF would not come back on board. But that would not happen as long as debt write-downs remained a political taboo for the ruling CDU.

Worse, he said the latest programme would weaken the Greek economy further and push it closer to bankruptcy rather than recovery, he said, meaning that Berlin’s contribution of loans to Athens might not be repaid.

“If it ever comes to that it will be because of failed politics of this government,” he said.

Mr Gysi noted that, in the latest wave of privatisations demanded by the third programme, Greece had agreed to sell of 14 regional airports to Fraport, the state-controlled company that manages Frankfurt airport for €1.2 billion.

“So we see the privatisation of Greek public property to the benefit of German public hand at a fantastic knock-down price,” he said. “Unbelievable but true.”

The opposition Green Party also criticised the government on its refusal to consider debt write-down for Greece. Athens had made huge mistakes, but nothing compared to the war Germany unleashed last century on Europe and the murder of European Jews.

“And yet a few years later Germany’s creditors, on whom Germany had brought such who had experienced such suffering, including Greece, agreed massive debt relief,” said Mr Sven-Christian Kindler of the Green Party. “On the basis of historical responsibility, we should be in favour of debt relief for Greece.”

The mass-circulation Bild daily stepped up its opposition today, saying that backing further Greek loans in a bid to hold the euro together was “terribly wrong”, would weaken further already dropping trust in Europe and betray of the European legacy of ex-chancellor Helmut Kohl.

“The old ghosts that we though had been overcome for every are back again,” it wrote. “Whoever cites Helmut Kohl today in the Bundestag to back this package has not understood Europe’s honorary citizen.”