Bailout will have ‘no immediate budgetary implications’ for Ireland 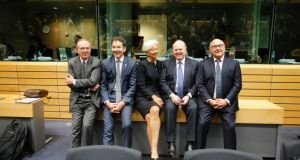 There will be no immediate budgetary implications for Ireland if a third bailout for Greece is agreed, Minister for Finance Michael Noonan has said.

However, the State is expected to incur a liability of over €1 billion as money it has already put in to the ESM fund is used as part of the bailout funding.

Speaking this morning in Brussels on his way into the fourth meeting of finance ministers in four days, Minister Noonan said Ireland would be contributing to a bailout for Greece via its participation in the ESM fund.

“It’s an ESM (European Stability Mechanism) programme, and since we have fully contributed to the ESM, we won’t be putting up any additional money up front so there will be no budgetary implications, but of course if things were to go wrong down the road, we are incurring liability, but it’s being incurred in respect of our contributions to the ESM.”

“Our key is 1.8 per cent of the totality so you can run the numbers. Of course the IMF will also be a contributor.. .and we’re fully up to date with our contributions to the IMF as well.”

While the overall size of the bailout is not finalised, it looks set to be over €80 billion, the bulk of which will come from the ESM, to which Ireland has contributed just over €1.25 billion to date.

Euro zone leaders agreed yesterday to give political backing for a third bailout package for Greece worth up to €86 billion, pending approval by the Greek parliament of a number of reform measures by Wednesday. The agreement was reached after more than 37 hours of weekend discussions in Brussels

Asked if he believed the creditors had been overly harsh in the bailout programme offered to Greece, Mr Noonan said the decision to hold a Greek referendum had been a “disastrous political decision”.

He said that, once the banks had closed and capital controls had been introduced “it was inevitable that the price of the bailout was going to be more expensive, because the closure of the banks has done a lot of damage”.

“We all know in democracies that political success and economic success go hand in hand, they don’t stay separate for very long. “

European finance ministers of all 28 member states meeting in Brussels on Tuesday are expected to discuss the issue of ‘bridge financing’ for Greece as a way of tackling the country’s short-term needs.

As well as the €86 billion bailout package under consideration, Greece has significant immediate short-term financing needs, including a €3.5 billion payment due to the European Central Bank on Monday and mounting arrears to the IMF.

While the European Commission has suggested that funds from the European Financial Stabilisation Mechanism (EFSM) fund, a 28 member bailout fund, could potentially be tapped as a source of bridge financing, Britain has already indicated its opposition to contributing to a financing programme via the fund.

Eurogroup president Jeroen Dijsselbloem said on Monday that a special task force had been appointed to look at the various options available for bridge financing, though any decision on a short-term financing package for Greece is unlikely to be taken before Wednesday when the Greek parliament is due to pass a number of reform measures demanded by creditors.

Eurogroup president Jeroen Dijsselbloem, who was yesterday re-elected as head of the eurogroup of finance ministers, said that he expects negotiations on a third bailout package for Greece to take at least four weeks.

But despite reaching agreement on Monday morning, a number of ministers warned that further steps need to be agreed before discussions would commence.

“There seems to be a lot of people who have jumped the gun here and thought that the beginning of the negotiations is automatic. No, it is absolutely conditional on the decision by the Greek government and the Greek parliament,” Finnish finance minister Alexander Stubb said.

Finland is one of a number of countries that need parliamentary approval for any third bailout package for Greece. With the German Bundestag expected to be recalled on Friday, German chancellor Angela Merkel said she could recommend “with full confidence” that the Bundestag authorize the opening of loan negotiations with Athens once the Greek parliament has approved the entire program and passed the first laws.