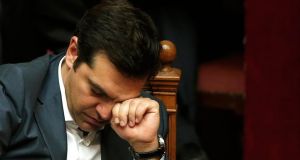 At great cost to Alexis Tsipras, a bailout agreement was secured to avoid default on ECB debts. But this is sticking-plaster stuff really. Photograph: Alkis Konstantinidis/Reuters

The new deal for Greece was just about enough to keep it in the single currency this week but two great fallacies undermine the arrangement.

First is the pretence that the country will realise no less than €50 billion from privatisations, thereby reducing its ongoing requirement for external aid. Second is the lack of an appreciable debt cut, which rests on the rather feeble presumption that up-front savings from interest rate cuts and longer maturities will be enough to ease the crippled Greek economy back on to a recovery path.

Neither notion holds water, yet each is an integral component of the funding proposal that is supposed to lift Greece from the mire. Leaving aside the abundant political risk, the deal itself looks unviable in the economic sense.

Albeit at great cost to Greek prime minster Alexis Tsipras, the agreement was sufficient to extract new loans to avoid default on European Central Bank debts due on Monday. But this is sticking-plaster stuff really, and it points to the inevitability of further crises down the line.

Whatever about the chances of that happening five years ago in the first bailout or three years ago in the second, it requires a huge imaginative leap to suggest it’s actually going to happen now. With its economy at a halt, its banking system reliant on ever-increasing amounts of ECB aid and its place in the euro in jeopardy, Greece will struggle for years to attract private investment.

It’s a sine qua non of the country’s predicament that the requirement for more than €80 billion in bailout loans flows from a gaping lack of investor confidence in its sovereign debt. Given all that has happened in recent weeks, it’s difficult to foresee any investor confidence in other Greek assets any time soon.

This problem is amplified by the conundrum of the country’s vast national debt. Greece owes €313 billion, most of it to other European governments including our own. A haircut on the principal amount has been ruled an impossibility within the euro zone, most forcibly by Germany, but it’s difficult to plot any way back for Athens without a cut. Having forced a painful post-referendum capitulation on Tsipras without a concession on this front, some kind of a creditor capitulation on the debt burden will be required if the latest rescue plan is to work. It’s as simple as that.

The argument goes that debt servicing to the end of the decade is not particularly large, the implication being that Greece will be fine for years. After two failed bailouts, however, the third rescue is a final opportunity. While the objective is to engender sufficient investors confidence in Greece for it to sell bonds at reasonable rates in the market, the very scale of the debt mountain is an insurmountable disincentive. Without tackling this, the plan is unlikely to work.

That is significant, though it should be noted that the IMF said this a matter for European creditors to address. There’s no hint from the IMF of a haircut on its loans to the Greeks . The same goes for ECB chief Mario Draghi, who claimed on Thursday it was “uncontroversial” to say debt relief was necessary. There was no suggestion, however, of the ECB providing such relief. The implication was that this was a matter for member states.

This is the state of play. For as long as these questions are not settled, there will not be a durable settlement for Greece.