A missed opportunity for Greece and the euro zone 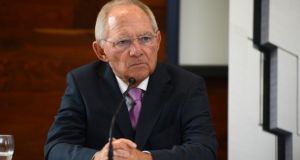 ‘Merkel, for her part, used Schäuble’s exit plan as a bargaining tool, certain that Tsipras would eventually cave in and get rid of Varoufakis.’ Above, Wolfgang Schäuble, in Dublin last year. Photograph: Cyril Byrne / The Irish Times

Now the dust has temporarily settled over the ruins of Greece’s economy, it is worth asking if there wasn’t a brief moment when the actors had found a way to cut the euro-zone crisis ’s Gordian knot. At some point in July German finance minister, Wolfgang Schäuble, appeared to have realised that his dream of a “core Europe” with a Franco-German avant-garde would vanish into thin air if Greece was allowed to remain in the economic and monetary union. Rewriting the rules of the union to accommodate the Greeks, Schäuble realised, would pull the euro southwards, and France, Italy and Spain with it – forever breaking up the European core.

His Greek equivalent Yanis Varoufakis, for his part, may have learned from his encounters of the third kind with the Eurogroup that the only role there was for Greece in the Europe of monetary union was that of an underfed and overregulated welfare recipient. Not only was this incompatible with Greek national pride; more importantly, what the governors of Europe would be willing to offer the Greeks by way of “European solidarity” would, at best, be too little to live on.

The deal Schäuble offered in the last hour of July’s battle of the euro might have been worth exploring: a voluntary exit (an involuntary one not being possible under the current treaties) that gave Greece the freedom to devalue its currency and return to an independent monetary and fiscal policy, plus emergency assistance and some restructuring of the national debt, outside of the monetary union to avoid softening its rules by creating a precedent. A generous golden handshake might have also been an idea, protecting Germany from being blamed for having plunged the Greeks into misery or driven them into the arms of Vladimir Putin.

Politics can make strange bedfellows, but sometimes just for a one-night stand. In the end Varoufakis was overruled by Alexis Tsipras and Schäuble was overruled by Angela Merkel. The latter, displaying truly breathtaking political skills, managed within a day or two to redefine the resounding no of the Greek people to their creditors’ demands into a yes to “the European idea”, defined as a common currency – allowing him to sign on to even harsher conditions than had been rejected in the referendum (called, it seems, at the suggestion of Varoufakis, who was sacked on the very evening the results were in). Afraid of the unimaginable economic disaster publicly imagined by fear-mongering euro supporters, and perhaps encouraged by informal promises by Brussels functionaries of future injections of other people’s money, Tsipras was ready to split his party and govern with those who had for decades let Greece rot in clientelism and corruption, offering the parties of Samaras and Papandreou an opportunity to regain legitimacy as pro-European supporters of “reform”.

Merkel, for her part, used Schäuble’s exit plan as a bargaining tool, certain that Tsipras would eventually cave in and get rid of Varoufakis. The new three-year rescue programme will carry her beyond her next election; it also avoids, or at least postpones, conflict with France, which wants Greece in for the same reasons that Schäuble wanted it out (Merkel expects less of France than Schäuble does, which makes it easier for her to live with François Hollande). It also spares her having to eat her famous motto from 2011: “If the euro fails, Europe fails” – as well as, for the time being, from having to let German voters in on the fact, commonplace among the cognoscenti but still mercifully hidden from the public, that the Greek rescue money will never be repaid. Moreover, after Schäuble had in earlier rounds talked the other EMU countries into sharing the Greek public debt, Merkel could count on their support for her refusal to consider debt restructuring. Most importantly, with Greece staying in common currency, she can now reassure her core constituency, the German export industry, that none of the captive members of euro zone will ever be released, not even on probation – something much appreciated also by the German trade unions, the Social Democrats, and her geostrategically-minded American friends.

Of course none of this means the euro mess won’t continue. On the contrary, with a historic window for a fundamental recalibration of the euro system missed we are in for more of the same, and the next act of the drama is already beginning. The problem with the euro is not a lack of “European spirit” on the part of the Greeks, or of German inability to appreciate the failsafe recipes of US macroeconomics. It is that the monetary union is a fundamentally misconceived institution, as it denies weaker countries the possibility of devaluing their currency in support of economic adjustment while otherwise preserving member states’ sovereignty. This being so, all the new agreement can achieve is again to buy time, though not a lot. The Greek “reforms” must be implemented, and their implementation supervised; inevitably lagging implementation will provoke calls for delayed disbursement of funds while debt restructuring will return to the agenda. Constant conflicts, with Germany at the centre, are preset.

More importantly, in return for having proven themselves good Europeans by getting rid of Syriza mark I, Greeks will be hoping for above-average economic growth, clearly not of the anaemic Spanish sort currently being offered as proof for the miracles austerity can do. After a decade of misery, growth will be expected to first restore the country to its relative position before the crash and then move it on to something like European convergence. Only neoliberal economists can find this realistic, and only on condition that all their recipes are followed to the letter. That is, in practice, never.

Meantime, in a low-growth global environment of what former US treasury chief Larry Summers calls secular stagnation, European solidarity will be called on to compensate the Greeks. The technical terms under which transfers will be made will be a matter of political public relations: Marshall plan, Merkel plan, Juncker investment fund, structural, regional or social funds – whatever. Very few people, if any, believe that programmes of this kind can “kickstart” an economy like Greece’s. To northern voters, in any case, they will appear as what they were in the past: political subsidies to keep pro-European governments – like Syriza mark II? – in power, by enabling them to keep their respective clienteles “pro-European” in turn.

Not that the limits of development assistance for backward regions in a currency union with high regional disparities were unknown. Germany and Italy have experience here that is far from encouraging: Italy in the Mezzogiorno (southern) regions, Germany in its Neue Länder of the former GDR – the latter being another case of a misconceived monetary union with disastrous economic effects. Both countries are today transferring roughly 4 per cent of their annual GDP to their poorer regions just to prevent the difference in per-capita income getting bigger. German taxpayers grudgingly continue to pay a “solidarity supplement” on top of their income tax for aid to East Germany: a region, incidentally, whose entire economic and political elite was after 1990 replaced with West German personnel, bringing with them the entire panoply of West German institutions. Still, the difference in per-capita income between West and East Germany has for years been stable at about 20 per cent.

Nothing even remotely resembling the personal and institutional reform applied to East Germany will happen in southern Europe – as it has never happened in the Mezzogiorno. The domestic politics of the euro zone, conducted through international relations, will remain both deadlocked and unfriendly. After the Schäuble-Varoufakis interlude there is no prospect in the foreseeable future of a re-nationalisation of monetary sovereignty. Nor is there any movement toward a de-nationalisation of political and fiscal sovereignty, with political union complementing monetary union.

On the contrary, each member state is today more than ever jealously guarding its national capacities to defend its interests against others. This includes even integration-minded Germany, which must now be afraid of the treaties’ “ ever closer union of the European peoples” putting it in a structural minority, and certainly France and Greece. The politics of European integration will consist of a permanent tug-of-war over the obligations following from the common currency – for “reform” on the one hand, for “solidarity” on the other – and the right relationship between financial support and political control.

Southern countries will find the economic compensation for their adherence to the European idea too meagre and the supervision attached to it too intrusive, and northern countries will find the financial demands of their southern partners excessive and the control offered them in return ineffective. European life under monetary union will be brutish and nasty, and unfortunately not even short. – (Guardian syndication)