‘We’ve had enough lies. We’re bankrupt, so we need help from the EU’ 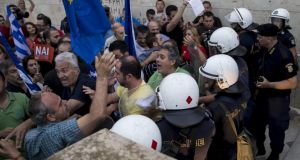 Pro-euro protesters tussle with riot police at a rally in front of the Greek parliament building in Athens on Tuesday night. Photograph: Marko Djurica/Reuters

Clutching Greek and EU flags – and umbrellas against untypically inclement weather for Athens in June – thousands of people attended a rally in the centre of the Greek capital last night, just hours after the country’s left-led government submitted proposals that would see it take a third, multibillion bailout from its lenders.

“Greece my birthplace, Europe my homeland,” declared one banner visible above the umbrellas, reflecting the view of many of those who turned out that Greece was not only facing the danger of a Grexit and returning to its previous drachma currency but that its position in the European Union was under threat.

“This is such a critical and difficult situation that everyone needs to take a stand. When times are desperate, everyone needs to come out on to the streets,” said Christina Fotinopoulou, a private sector employee, pointing out it was her first time participating in a demonstration, and she didn’t attend any of the similar “We’re staying in Europe” gatherings held on the same spot in recent weeks.

Whatever difficulties Greeks are experiencing now, “their situation would be a lot worse if Greece returns to the drachma”.

Conceding that the country’s lenders should have provided the government with more slack, she said this could only have happened “if they believed that they were dealing with grown-ups at the negotiating table”, echoing comments made by International Monetary Fund chief Christine Lagarde earlier in the month.

After breaking into chants of “Greece, Europe, Democracy”, the demonstrators made their disdain for the government clear with slogans such as “Never again the left” and “Down with Zoi’s junta”, the latter referring to parliamentary speaker Zoi Konstantopoulou, an MP on the left of prime minister Alexis Tsipras’s Syriza party.

Katerina, attending the rally with her husband, also claimed she was a first-time protester, and said she wanted to send a strong message that Greece was an integral part of Europe.

Although no polls have been published ahead of the referendum, Katerina said she had heard that private polls put the Yes camp ahead with 65 per cent of the vote and that an impending defeat in the referendum motivated the government to seek a third bailout at the last minute.

Viewing the decision facing Greece as one that risked its future not only in the euro zone but also in the EU itself, architect Spilios Papadopoulos said it was essential for Greece to remain in a “united Europe for cultural, political, economic and democratic reasons”.

“There must be no doubt about Greek’s desire to remain in the EU,” said the architect, who was attending the rally with his wife and two teenage daughters.

Greece had to pass through difficult years in order for it to move on, he added.

“We’ve had enough lies. As a country we’re bankrupt, so we need help from the EU and also to work hard ourselves, and that can’t be done without fixing the economy and building exports.”

But despite the talk of boosting the economy, Nikos, a street food vendor in the middle of the square, said business was much better at the previous evening’s pro-government rally, which he said was also much larger.

“The people last night were much more relaxed than these people. They even seemed to be happier. This crowd are much more reserved and don’t seem to be as hungry either,” he said, gesturing to the stack of unsold souvlaki on his stall.