Germany brings in ‘No means No’ law for sex offences 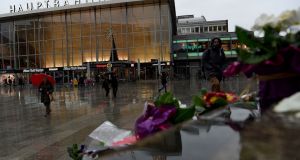 Flowers and letters of protest on the steps of the cathedral in front of Cologne’s main train station, on January 11th last, following sexual assaults on women there on New Year’s Eve. Photograph: Patrik Stollarz/AFP/Getty Images

Germany’s Bundestag has tightened up its criminal code for sexual assault as, seven months after the New Year’s Eve attacks in Cologne, the country still struggles with the issue of violence against women by immigrant men.

Stung by cover-up claims over the Cologne attacks, German politicians and police concede it is difficult to find a balance between a responsible, victim-focused response while pushing back against tabloid media warnings of roving immigrant “sex mobs”.

On Thursday Germany closed a legal loophole exposed after Cologne: that sexual assault convictions hinge on a woman proving in court she physically resisted an unwanted sexual advance. More than 1,000 women filed criminal complaints after the Cologne attacks, but many reported being frozen with shock when encircled by gangs of young men who groped and raped them in the New Year’s Eve crowd.

The Cologne attacks were blamed largely on men from northern Africa and, though many were long-time residents in Germany, the attacks hardened public opinion against Chancellor Angela Merkel’s refugee crisis response. Only a small number of suspects were caught and investigators have found it difficult under current legislations to secure convictions.

The new law, dubbed “No means No” by the media, reflects how surprise, intimidation or threats during a sexual assault can make physical resistance impossible. “This is a considerable step towards greater protection of women from sexual violence in future,” said Heiko Maas, federal justice minister.

Official statistics in Germany show that about 8,000 rapes are reported annually but that just one in 10 victims files a complaint. Of that number, just one in 10 leads to a conviction.

Germany’s immigrant crisis has complicated further an already emotive situation. Controversy raged this week over a police report indicating a spike in complaints of sexual assaults by immigrant men against women in western German swimming pools.

Police in the western state of North Rhine-Westphalia (NRW), home to one in five Germans, registered 103 complaints in swimming pools so far this year, of which 44 suspects were immigrant men.

From voyeurism and exhibitionism to coercion and rape, the report prompted the local edition of the Bild tabloid to warn of immigrant men “swimming pool sex mobs”. However pool operators in the two largest cities of Düsseldorf and Cologne disputed the report. They worked closely with the local police and were not aware of any cases of sexual molestation or rape.

Alarmed by the tabloid media reaction to their swimming pool report, NRW police put out a second statement, saying: “These are complaints not convictions, and we don’t know what lies behind them yet.”

NRW authorities say it is too soon to draw conclusions about such complaints because police only introduced “immigrant” as a perpetrator category at the start of the year – in response to claims that they tried to cover up the origin of the perpetrators of the Cologne attacks.

After taking in about one million refugees in 2016, Germany is not alone in struggling with this sensitive issue. Sweden, also on the front lines of Europe’s migrant crisis, has been shocked by reports of immigrant men committing about 50 sexual assaults at two music festivals. But a police report attributing the attacks to a gang of young men from a nearby migrant facility “taking liberties” was removed this week after it found just two of the alleged perpetrators were immigrants.

Like their German colleagues, Swedish police are sensitive to cover-up claims after it emerged after the fact that that some 36 sexual assaults at festivals in 2014 and 2015 were linked to young Afghan refugees.