Country cannot ignore questions over its role in supporting conflict 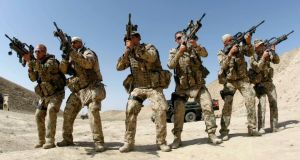 When Chancellor Angela Merkel arrives in Brussels for today’s emergency summit, the German leader will press her European colleagues to tackle the continent’s refugee crisis at its root by addressing the causes of war and conflict.

But does Berlin see the need to tackle the conflict-exodus dynamic by considering Germany’s record as the world’s fourth-largest arms exporter?

“I don’t want to answer this question philosophically,” said a senior Berlin official to The Irish Times yesterday.

According to the Stockholm International Peace Research Institute (SIPRI), only the US, Russia and China export more arms annually than Germany.

In an uncertain world, German tanks and submarines are now as popular as German cars. The light and durable G36 assault rifle, manufactured by Heckler & Koch (H&K), is the weapon of choice for German soldiers, Mexican drug barons and Islamic State terrorists.

Though big guns are big business, Germany insists – with a nod to its history – that it pursues a restrictive arms regime, requiring government permits for all arms exports.

Berlin says it refuses to permit exports to countries where “sufficient suspicions” exist that weapons will be used for repression or human rights abuses.

But tonight Germany’s ARD public television dedicates its evening schedule to challenging this claim, examining the German arms industry’s close contacts to government ministries. ARD claims these ties are so close that companies like H&K, maker of the G36, have no problem fiddling their export applications to secure approval.

The permits, to arm police in 10 Mexican states, were refused at first when Germany’s foreign ministry pointed out that several states due to receive deliveries had a record of shooting and “disappearing” civilians.

After the initial refusal the export permit was later altered to exclude the problem regions, resubmitted and granted.

The deception emerged only later when, by accident, H&K submitted another export application to Mexico for G36 spare parts, including to regions where it was, officially at least, not selling guns.

Between 2006 and 2009, H&K delivered more than 10,000 G36 assault rifles to the Mexican authorities, but is now under investigation for illegal sales to police in four Mexican states with records of accepting bribes from and giving guns – German guns – to drug lords.

German arms companies are as experienced in getting around export restrictions as they are in making guns. When Germany’s Sig Sauer exported 65,000 handguns to a US subsidiary, ostensibly for the domestic market, a media investigation later showed how the guns turned up with the police in Colombia – a country on Berlin’s sanction list.

The G3 was developed by H&K for the German Bundeswehr (the armed forces), the federal government owns the patent, and among 15 official licensed manufacturers around the world is Saudi Arabia. Since 2008 it also holds a licence to manufacture the G36.

Though it is supposed to be making G3s only for its own security forces, the Saudis dropped a cache of G3s over the border in Yemen last April to help its allies in the civil war there.

Questioned on this last April, a Berlin spokesman conceded that the Saudi licence agreement meant it was “not possible” to control where in the world German-licensed, locally produced G3s and G36s end up.

On YouTube you can find out, as terrorists in Syria brandish their G3s for the camera.

For Green Party foreign spokesman Omid Nouripour, these German weapons licences are a “declaration of bankruptcy” for the country’s “restrictive” arms export tradition.

“These people are coming from countries at war, countries being flooded with weapons, including German weapons,” said Mr Ralph Billinger of TdH.

“We export high-quality, precise and robust weapons in a large, unprecedented volume,” said Cardinal Rainer Maria Woelki of Cologne in his New Year address, “and are then amazed when victims of violence knock on our door.”

So, as Germany presses its EU partners to help share its refugee burden in Brussels today, is Berlin ready to discuss its role in the sales of weapons fuelling the conflict behind the crisis?

“We’ve often discussed the restrictive principles of Germans arms policy,” a senior German official told The Irish Times. “There is no reason to call that into question.”