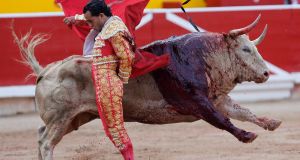 Over the last two summers, Spain has seen an almost identical drama play out in the public sphere. A well-known bullfighter is killed in the bullring, sparking an outpouring of grief and tributes from admirers, but also celebrations of the death on the part of animal rights activists.

In July 2016, Víctor Barrio died after being gored in a bullring in the town of Teruel, making him the first professional matador to be killed in action in the country this century. Bullfighting supporters and opponents clashed on social media over the death, with one Twitter user saying he would “dance on the grave” of Barrio – prompting a bullfighting organisation to take legal action, with the case still open today.

Then on June 17th, Iván Fandiño died in hospital after being gored while bullfighting in Aire-sur-L’Adour in southwest France. A star of the bullfighting world, the 36-year-old Fandiño’s death drew a torrent of messages of admiration and condolences from colleagues. “The coward dies 1,000 times, the brave dies only once,” tweeted Alejandro Talavante, a fellow bullfighter. “Rest in peace, friend.”

King Felipe VI, prime minister Mariano Rajoy and many other politicians also expressed their grief and support. But more jubilant messages then followed, many of them lauding the four-year-old bull that killed Fandiño, called Provechito, for fighting back against its would-be executioner.

“I’ve just read about a bullfighter who has died in hospital. I send my blessings to the bull,” said one tweet, while another read: “Iván Fandiño good bullfighter better corpse.”

British comedian Ricky Gervais waded into the debate, tweeting: “Beautiful tortured bull defends itself.” (Two years ago, reacting to the death of an amateur bullfighter in Spain, Gervais said: “Neither I nor any bull wants you to fight it. But if you insist I hope it defends itself. F**k anyone who tortures animals for fun.”)

Fran Rivera, one of Spain’s best-known matadors, has hit back, saying that he would “s**t on the dead of all the bad people who are happy at the death of a good man.”

Unlike the Barrio case a year ago, there have so far been no reports of legal action in response to the furore that has followed Fandiño’s death. But the bitter fallout that now seems customary in Spain when a bullfighter is killed in the ring highlights the tensions surrounding this pastime as it struggles for survival in the 21st century.

“For some time now the bullfighting lobby, which has fallen into desperate decline, has not been able to hide the symptoms of its death throes,” noted El Diario newspaper.

Many of the difficulties of la fiesta stem from Spain’s recent economic crisis, which saw public subsidies for town bullfights dry up and many fans driven away by ticket prices that remained stubbornly high. Since then, the economy has recovered but the industry hasn’t.

But there are political obstacles, too.

In 2012, Catalan nationalists outlawed bullfighting in their region and more recently, the arrival of younger politicians belonging to the so-called “new left” with a progressive, predominantly urban mindset, has given animal rights an unprecedented prominence in the public arena.

But the generational issue is not just visible among younger politicians, it can be seen among ordinary Spaniards too.

One Ipsos Mori poll taken last year showed that only 7 per cent of 16-24-year-olds support bullfighting, while 84 per cent of the same age group feel “little” or “no” pride at living in a country where bullfighting is allowed.

Little wonder, then, that the bullfighting industry feels cornered – even more so when one of its few young stars is killed.

“I’m Spanish, I like bullfighting,” said Fran Rivera, one of the most passionate and controversial defenders of the pastime of recent years. But despite his efforts, it is increasingly hard to find people who can say the same thing.