From Nazi holiday camp to Cold War base to hot property 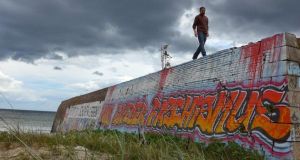 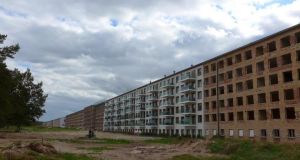 A canoodling couple lies on the pristine white sand. Two boys collect shells for their sand castles. A trembling black chihuahua yaps pointlessly at the feeble waves of the Baltic Sea.

It’s a sunny day on the pretty island of Rügen, tucked away in Germany’s northeastern corner.

For millions of West German holidaymakers, unification in 1990 was a revelation, opening up to them 350 glorious kilometres of pristine coastline in the state of Mecklenburg-Vorpommern. Made up of two historically distinct regions, Meck- Pomm, as locals call it, has Germany’s lowest population density but some of its most spectacular scenery. This is the land of 1,000 lakes, the redbrick Hanseatic glories of Rostock and Stralsund and the spectacular fairytale palace in the state capital, Schwerin.

Back on Rügen, the spotless seaside resort of Binz has just been crowned most popular destination in Europe for Germans by travel website Trivago.

But let’s head back to the beach 5km north of Binz, where all would be utterly normal if it wasn’t for a few troubling details such as the fiery graffiti on what looks like a pier, reading: “Nie wieder fascismus” – Never again fascism.

If you’re wondering what fascism has to do with an otherwise innocent beach, head inland into the woods and you’ll soon discover a lost world of mossy concrete and twisted metal.

Keep going and soon, without warning, it hits you: a concrete monster with 10,000 empty eyes, five storeys high and stretching so far left and right that it disappears on the horizon.

For 75 years this 3.5 km-long colossus has stood here in Prora, a stubborn and silent witness to two dictatorships: the Third Reich and the East German Democratic Republic (GDR). The structure was planned as the first Nazi-era holiday camp for the Third Reich’s “Kraft durch freude” racket, the “Strength through joy” leisure organisation with a firm ideological focus.

The Nazi propaganda remains so effective today that many people are surprised to hear the complex was abandoned, unfinished, at the outbreak of the second World War. Only a decade later was Prora partially completed. It served for 40 years as a base for East Germany’s National People’s Army (NVA).

Of the 15,000 men performing obligatory military service here at any time were several hundred bausoldaten or spatensoldaten, so-called building or shovel soldiers. These were all men who had rejected military service and declined to bear arms. Their punishment: deployment as forced labourers in army bases such as Prora, slaving for up to 18 hours a day.

Yesterday a group of former bausoldaten – many physically and mentally scarred by their time in Prora – returned to the dilapidated base to unveil two memorials: a tall metal pillar and a reconstructed arrest cell.

Stefan Wolter remembers his Prora bausoldat service, from 1986 to 1988, as an “unimaginable machine of grey-clad monsters, clicking boots on concrete pavements, barked orders and screams of ‘Let me go home’ from soldiers’ windows”.

Like other bausoldaten, he was denounced as an enemy of the state for refusing to “defend peace and socialism with a weapon”. Many bausoldaten were radicalised by their time in Prora and subsequently made important contributions to bring down the East German regime in 1989.

For them, yesterday’s ceremony was a milestone in their quarter-century campaign for wider recognition – hampered, they say, by a co-ordinated efforts to silence them by ex-NVA officers and local politicians.

Local historians do not see a conspiracy against them but agree Prora’s 40-year East German history has come off second-best to the Third Reich’s propaganda.

“This is a hard-fought place of historical memory,” says Susanna Misgajski, head of the Prora Zentrum museum. “The Nazi era is easier to market and, it has to be said, has been turned by some people here into a business. But I see a growing interest in our work on the East German period. It just needed time.”

After decades as an abandoned, windowless ruin, Prora is changing. One renovated block is now a popular youth hostel while, further down the beach, other hulking blocks will soon be luxury holiday apartments. The target market, as one estate agent poster shouts, is “people who can think big”.

I decide to join the curious holidaymakers and visit the show apartment. Stepping over the Nazi-era threshold and climbing a cheap socialist staircase, the peculiar atmosphere leaves me wondering if there is compound word in German for impressive-depressing.

Inside the apartment, visitors shuffle uncertainly around the neutral, contemporary decor. Some crane their heads, trying to see the sea over the tree- filled dune while others note silently the exposed concrete girders in the 2.5m ceiling that I can touch without difficulty. The megalomaniacal Nazi exterior is, on the inside, laughably meagre.

Downstairs, agent Steffen Schroeder says sales are brisk: “Some people come in, sit right down and buy an apartment immediately.”

But opinion is as divided among the show apartment visitors as among the locals in Prora. Some welcome the private development, which is ending decades of decay under state ownership. But others are uncomfortable with a historic site being sold for a profit, with tax breaks for investors.

The most vocal opponents are the former bausoldaten. They see the development as a setback for their fight for recognition. That developers have been allowed obliterate important traces of Prora’s NVA past, they say, speaks volumes of official attitudes to East Germany.

“I find it in questionable taste that these people are, in effect, completing Hitler’s ‘Kraft durch freude’ holiday camp,” says a livid Stefan Wolter.

If you compare the developer brochures with the uncompleted Nazi renderings from the 1930s, there is an unmistakable, uncomfortable similarity between the two.

Back on the beach side, Prora’s new residents sit stoically on their new balconies, ignoring the deafening sound as a nearby dumper truck empties bricks into a grinder, reducing them to red dust. This very German seaside duel - Hitler v Honecker - is far from over.