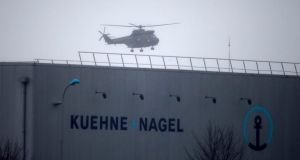 8½ hours, during which he informed the GIGN paramilitary police of the extremists’ words and movements.

On Friday morning, the owner of the CTD printing plant at Dammartin-en- Goele, north of Paris, saw two men in black with rocket launchers and Kalashnikovs through the window.

Michel Catalano had been watching the news, and realised immediately he was looking at France’s most wanted men, who had murdered 12 people on Wednesday. “I had just enough time to warn my employee,” he said.

Catalano walked to greet the approaching gunmen. Young Lilian Lepère, his employee, ran to the kitchen, where he squeezed into a cupboard measuring 70 x 90 x 50 centimetres.

Catalano offered the gunmen coffee, and bandaged a superficial wound for one of them. “I thought I would not be alive that night,” he told France 2 television. “They were never aggressive with me. If they had an ounce of humanity, it was towards me. They let me go. The thing I feared most was that they would find Lilian.”

For most of the siege, the Kouachis were in the director’s office with Catalano, on the other side of a thin wall from the kitchen where Lepère hid. Lepère heard one of them inspecting rooms. After an initial shootout with gendarmes, one came into the kitchen and opened the fridge and the cupboard next to the one where Lepère hid.

“He drank water from the tap above my head. I could see his shadow through the crack in the door,” Lepère said. “It was a surreal moment, like what you see in the movies. I thought, ‘If he dries his hands with the towel, it will pull the cupboard open and I’ll be finished’.”

Because the wall between him and the gunmen was so thin, Lepère could not make the slightest sound. It took a quarter hour to extract his mobile telephone. He turned the ringer off and sent text messages to relatives. When his brother-in-law texted back that the family were in direct contact with police, “I shed a tear. I trembled. It really helped my morale.”

Just after 5pm, “There were two big explosions. My first feeling was liberation. I had been waiting more than eight hours without moving. I hurt all over.”

Gendarmes took Lepère out through a window, in case the plant was booby-trapped.

Survivors of the hostage-taking at the kosher supermarket in eastern Paris also spoke to France 2. Lassana Bathily, a supermarket employee, is a Muslim from Mali, like Ahmedy Coulibaly, who killed four Jewish hostages on Friday. “I showed the others where the walk-in fridge was in the basement, so they could hide there,” Bathily said. He found a way out of the building, then explained to police where the hostages were.

Coulibaly killed two hostages at the beginning of the siege. Two more were killed when they tried to overpower him. He watched the TV news and transmitted images from his portable computer.

“He wanted to know our origins,” said a former hostage who was not identified. “He told us that he was from Mali, and gave us a stupid, Islamist lesson on geopolitics. At 5pm there was an explosion. Everyone dove to the ground . . . Within two minutes he was dead and it was all over.”