France: Fillon and Juppé clash for chance to take on Le Pen 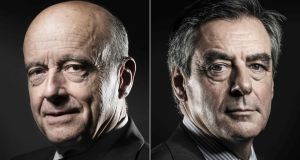 Alain Juppé and François Fillon: The former prime ministers have knocked heads over immigration and the economy in the run-off of France’s right-wing presidential primary. Photographs: Joel Saget/AFP/Getty Images

If he wins the primary of the conservative party Les Républicains on Sunday night, François Fillon will likely become president of France next May.

When Fillon told Le Figaro this week that Sunday’s run-off is the de facto presidential election, he expressed a widespread assumption that the LR candidate will defeat Marine Le Pen, the leader of the extreme right-wing Front National, next May 7th.

A record 8.5 million French people – a third of the television audience – watched the final debate between Fillon and Alain Juppé on Thursday night.

A poll showed 57 per cent of viewers thought Fillon won the debate, to 39 per cent for Juppé. Fillon swept every region except Juppé’s native southwest and parts of Paris in the first round, and is favoured to win this Sunday.

The past week has made evident that France is again swimming against the tide. As the France Inter radio commentator Bernard Guetta recalled, when François Mitterrand was elected in 1981, he nationalised banks and industries and lowered the retirement age just as other governments began dismantling the welfare state and adopting liberal economic policies.

Now, Donald Trump promises massive investment in US infrastructure. Jean-Claude Juncker has committed the EU to a similar programme, and the IMF exhorts governments across the world to promote jobs and growth through spending. No matter which former prime minister goes to the Élysée, France looks set to do the opposite.

The candidates’ basic policies are the same: reduce government spending (€110 billion for Fillon, €100 billion for Juppé); fire civil servants (500,000 for Fillon, 250,000 for Juppé); reduce social charges on employers; abolish the 35-hour working week; raise the retirement age from 62 to 65.

The difference is in method. Fillon wants to move fast and hard; Juppé stresses the need for calm and unity. Juppé’s experience of mass strikes against his reforms in 1995 may explain his more cautious approach.

“What social model are you talking about?” Fillon asked on Thursday night. “A social model that creates six million unemployed and leaves two million youths without training? That impoverishes the middle classes and cannot stop the explosion of poverty? The French social model is leaking all over.”

Most experts agree that constraints on the labour market are the root cause of France’s chronic mass unemployment, yet no leader has dared abolish them.

“Look around,” Fillon said. “The countries with full employment are those where it’s easier to hire and fire. It’s wrong to believe that tougher conditions for firing protects employees. It’s the exact opposite.”

Despite the fact that the primary is between two life-long conservatives, it polarised along right-left lines this week, with the right-wing daily Le Figaro championing Fillon and the left-wing Libération supporting Juppé.

Right-wingers say Fillon is best placed to defeat Le Pen, because his policies are much closer to hers. Au contraire, say leftists. Socialist voters who could not bring themselves to vote for Fillon would rally to Juppé, whose nonconfrontational approach resembles that of president François Hollande.

The divide is most obvious regarding immigration. Fillon rejects multiculturalism outright, saying: “I want foreigners who move to our country to integrate, to assimilate, to respect our cultural heritage, which is extremely powerful in the depth of the French soul.”

“France’s identity is diversity,” Juppé responded. “We are not all the same.We have different origins, different coloured skin.”

Juppé’s attempts to reach out to French Muslims may have cost him the election. Since at least 2009, extreme right-wing groups and social media known as the fachosphere have portrayed the former mayor of Bordeaux as “Ali Juppé”.

Juppé scolded Fillon for failing to denounce the “ignominious” disinformation campaign tarring him and Tareq Oubrou, the moderate imam of Bordeaux. “I have nothing to do with this campaign,” Fillon responded. “When I get called a homophobe every day, I don’t hear you defending me.”

The gay and lesbian community is mobilising against Fillon, because he wants to restrict abortion and procreation rights for homosexual couples.

If Fillon wins as expected, it will be the third victory in a row for Russian president Vladimir Putin, after Brexit and Donald Trump’s election. Putin didn’t wait for the run-off to congratulate Fillon, calling him “a great professional” and a “man of integrity” who “distinguishes himself among world politicians”.

If Fillon wins, and if Putin can count on him and Trump, the Russian president will have three out of five votes in the UN Security Council.