France asks whether François Fillon can ride out scandal 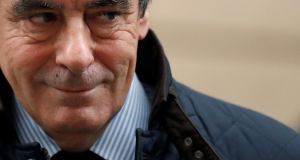 François Fillon: The presidential candidate of the French centre-right claims he is a victim of “an institutional coup d’etat” by the socialist government. Photograph: Reuters/Christian Hartmann

As their hopes of winning the French president’s office next May 7th continued to evaporate on Wednesday, supporters of the conservative Les Républicains (LR) party spread a dark joke: “The dog is the only member of the Fillon family who never collected a salary . . . but you’d better check that!”

Since the investigative weekly Canard Enchaîné revealed on January 25th that Fillon’s Welsh wife Penelope had received hundreds of thousands of euro for what are suspected to have been fictitious jobs, the country has watched “Penelope-gate” unfold with the fascination normally accorded to a television series.

For the first time, an Elabe poll for Les Echos and Radio Classique showed on Wednesday that Fillon would be eliminated in the first round on April 23rd.

Marine Le Pen, the leader of the extreme right-wing Front National, is up three points to 26-27 per cent. Emmanuel Macron, the independent candidate and founder of the “En marche!” movement, would win 22-23 per cent, while Fillon would come in third at 19-20 per cent. (The one-point variation depends on whether the centrist François Bayrou is a candidate or not.)

In yet another display of righteous indignation, Fillon told centrist and conservative parliamentarians that he was the victim of “an institutional coup d’etat” by the socialist government. He pleaded with his colleagues to “show solidarity” and “stick with [him] for another two weeks” until the judiciary investigation into the scandal is completed.

The question on everyone’s mind was summed up by Le Monde’s banner headline: “Can François Fillon hang on?”

The candidate faces a revolt by LR deputies who fear losing their seats in the June legislative elections. Georges Fenech, deputy for the Rhône department, asked Fillon to withdraw from the race, saying that “the situation has become untenable. We are not talking about justice, but ethics.”

LR politicians are frantically looking for a plan B. The domain names baroin2017.fr, bertrand2017.fr and wauquiez2017.fr have been created since “Penelope-gate” started.

They refer to François Baroin, Xavier Bertrand and Laurent Wauquiez, former LR cabinet ministers from the younger generation. Baroin, a senator, president of the mayors of France and a former finance minister, is particularly charismatic and resembles Macron.

More than a million

The Canard fired a second salvo in Wednesday’s issue, revealing that salaries paid to Penelope Fillon and the couple’s children, Marie and Charles, totalled €1,015,175.

More than 90 per cent of that sum was taxpayers’ money, used to pay Fillon’s wife and children as “parliamentary assistants” to himself and Marc Joulaud, who replaced Fillon at the National Assembly in 2002, when Fillon became a cabinet minister.

Fillon has never contested the amounts paid, only allegations that his family members performed no real work. He points out that it is legal for French parliamentarians to hire family members. (In 2014, 52 spouses and 60 sons or daughters were on the payroll.) But it is illegal to pay them for fictitious employment.

The Canard revealed on Wednesday that Ms Fillon “worked” a total of 12 years, not nine, as previously thought, as a parliamentary assistant. And Joulaud paid her more than previously reported; an average €10,167 per month in 2007; more than Joulaud’s salary and €1,200 more than his entire staff allowance.

Fillon has said in the past that the French minimum wage of €1,457.52 per month is too high.

Fillon’s most fervent supporters believe he is the victim of a plot and blame the media for the scandal. But others say they no longer feel able to vote for him. Some wouldn’t mind his having hired family members, but are shocked by the amounts paid.

Joulaud, who has so far observed total silence regarding his employment of Ms Fillon, was on Wednesday questioned by the “financial pole” of the Paris high court, which is investigating possible misappropriation of public funds, misuse of assets and concealment.

Marie and Charles Fillon were both 23-year-old law students when their senator father employed them. They were paid the same hourly rate as Sylvie Fourmont, who then headed Fillon’s cabinet and had more than 30 years of experience in government ministries.

During his two years at the senate, Fillon made zero speeches, proposed zero draft laws, wrote zero reports, asked one question and submitted one amendment, according to the Canard.

The investigation so far has revealed that in the 12 years that Penelope Fillon was paid for working as a parliamentary assistant, she never obtained an identity badge to enter the National Assembly, or a parliamentary email address.

Attention is also beginning to focus on 2F Conseil, the lucrative, secretive consulting firm whose accounts show it paid Fillon €757,526 between June 2012 and December 2015.