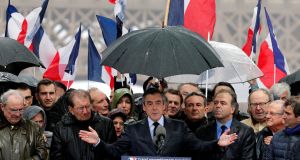 François Fillon won his gamble on Sunday when some 40,000 people braved wind and rain to stage a show of support for the beleaguered conservative presidential candidate.

But it could prove to be Fillon’s last stand.

Over the weekend, Fillon’s campaign director, Patrick Stefanini, and his spokesman, Thierry Solère, joined some 260 elected officials from Les Républicains (LR) party who have left the campaign since Fillon admitted that he will be placed under formal judiciary investigation on March 15th.

Judges suspect Fillon misued public funds to pay his wife and two of their children for ficticious jobs as parliamentary assistants.

Fillon will face colleagues who want him to withdraw from the campaign at a meeting of the political committee of LR on Monday night.

“I ask myself about those who doubt and who jump ship,” Fillon said in his speech on the Place du Trocadéro, overlooking the Eiffel Tower. French people would be “submerged by a wave of disgust” if they saw what he had seen: “shameless desertion, saving their skins.”

He had examined his own conscience, Fillon said. “To the politicians of my camp I say this: examine yours. Will you let momentary passions supersede the needs of the nation? Will you let the interests of factions, of careers . . . triumph over the grandeur and coherence of a project adopted by more than four million voters [in the LR primary]?”

A poll published late on Sunday by Le Figaro showed Fillon would win only 17 per cent of the vote in the first round of the election on April 23rd, compared to 26 per cent for the extreme right-wing candidate Marine Le Pen and 25 per cent for the centrist Emmanuel Macron.

By contrast, Alain Juppé, the runner-up in the LR primary, would win 24.5 per cent in the first round, compared to 27 per cent for Ms Le Pen and 20 per cent for Macron, qualifying the conservatives for the second round on May 7th.

Fillon described the tens of thousands on the Place du Trocadéro as “the people who are at work every day, who believe in family, in just order, who respect the tricolour flag, the people who do not make noise, who have common sense.”

The rally was co-organised by Fillon’s remaining staff and “Common Sense”, the political wing of a group that organised mass protests against same-sex marriage in 2013. Mr Fillon’s affiliation with these traditional Catholic groups has offended some in LR.

Jean Hildbrand, a retired IBM executive and the deputy mayor of a town east of Paris, complied with Fillon’s request to bring a flag to the rally. He and his wife participated in demonstrations against same-sex marriage.

“France has €2 trillion in debts and everybody is on welfare,” Hildbrand says. He approves of Fillon’s plan to make drastic cuts in government spending “like Mrs Thatcher did in Britain, like they did in Canada 15 years ago”.

Gamble with the future

Hildbrand condemned the officials who have abandoned Fillon. “We’re not playing monopoly,” he says. “We’re gambling with the future of France.”

Regarding the fictitious jobs scandal, Hildbrand said that if he were run over in the street and a surgeon was about to save him, “I wouldn’t ask if he ran red lights to get there, or if he paid his taxes. I’d let him save my life.”

Bertrand, a 60-year-old petroleum engineer who attended the rally with his wife and four children, said he was disgusted by the “dogged persecution” of Fillon. Speaking of France’s socialist president, he says, “Monsieur Hollande keeps his women at the Élysée and all France pays.”

The legalisation of same-sex marriage and the banning of websites that purport to counsel women seeking abortion to better dissuade them were “violations of French values”, Bertrand continues. Macron’s supporters were “the pariahs of French society”, he adds.

When I asked who he had in mind, Bertrand cites Pierre Bergé, the longtime partner of the late designer Yves Saint-Laurent and a major force in French business, culture and politics. “His lifestyle is absolutely against the values of France,” Bertrand says.