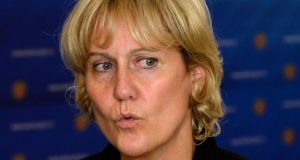 Nicolas Sarkozy’s Les Républicains (LR) was to bar Nadine Morano, member of the European Parliament, former cabinet minister and long one of Sarkozy’s most loyal servants, from standing in December’s regional elections last night, after she failed to write a letter of apology demanded by Sarkozy.

Morano is from the far right of the party and is considered a loose cannon. Her “sin” was to say, on a television talk show on September 26th, that she wants France “to remain France,” which she defined as “a country of the white race in which foreigners are received”.

The remark provoked outrage on the left and centre right, and divided Morano’s cohorts in LR. She has been unrepentant, insisting she spoke “common sense” and merely quoted Gen Charles de Gaulle, the spiritual father of the party.

“It’s very good that there be yellow, black and brown Frenchmen,” de Gaulle allegedly told his former cabinet minister and biographer Alain Peyrefitte, in a text written by Peyrefitte 30 years later. “But on condition that they remain a small minority. Otherwise, France would no longer be France. We are above all a European people of the white race.”

De Gaulle’s description of Europe as “nations . . . all being of the same white race, of the same Christian origin” in his Memoirs of Hope preceded recent statements by the Hungarian prime minister Viktor Orban by 45 years.

Morano posted a photograph of herself at de Gaulle’s grave at Colombey-les-Deux Eglises on her Facebook page with the caption: “I am not of the race of cowards. I will not renounce the General for any office.”

At a stormy meeting of LR’s political bureau on Tuesday night, the party’s former president Jean-François Copé defended Morano, warning Sarkozy he risked creating a “disastrous precedent” if she was punished.

Morano is popular and party headquarters in the rue de Vaugirard has received numerous messages of support from voters threatening to tear up their membership cards if she is disqualified.

Sarkozy reminded Copé of his own remark, three years ago, in which he spoke of “children who can’t eat their pain au chocolat because of Ramadan”.

Morano denounced a “cabal” by politicians, particularly among LR’s centre-right allies, and the media. She reminded Sarkozy she always stood by him, “even when you were questioned by police”, and recalled that only a few months ago, Sarkozy compared migrants from the Middle East and Africa to an unstoppable leak.

Morano intends to challenge Sarkozy for the presidential nomination. She asked television viewers to contribute to her subgroup, the Rally for the People of France, saying “If 100,000 of you give €10, I can be a candidate in the [presidential] primary.”

Charles de Gaulle, the grandson of the general and a former candidate for the extreme right wing National Front in municipal elections, has rallied to Morano. So has the former film star and animal rights activist Brigitte Bardot. Alexandre Poniatowski, an LR deputy in the National Assembly, told Libération: “Nadine is not racist. We understood what she meant: that Europe is mostly white and that we have to control sub-Saharan immigration. All of us agree with that.”

The word “race” is highly charged in France, so much so that François Hollande promised in his 2012 presidential campaign to remove it from article one of the constitution, which states France “ensures equality before the law of all citizens without distinction regarding origin, race or religion”.

Hollande did not keep his promise, but one of his cabinet ministers explained to me that “we [socialists] don’t believe there are different races”.

Opponents of the word say scientists have found no biologically homogenous groups of “blacks,” “whites” or other ethnic groups that would justify its use.