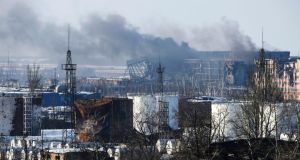 Fighting between government forces and Russian-backed separatists has intensified in eastern Ukraine, as efforts to restart peace talks failed again and United Nations experts warned of a growing humanitarian crisis in the disputed area.

“Six of our servicemen have been killed as a result of combat activity and another 18 have been wounded in the past 24 hours,” Ukrainian military spokesman Andriy Lysenko said, as a fierce battle for the ruined Donetsk airport continued.

The sounds of mortar, rocket and machine-gun fire crashed around the airport last night, as Ukrainian troops and militants fought at close quarters over a site that has become a symbol of Kiev’s refusal to retreat entirely from rebel-held Donetsk city.

Ukrainian president Petro Poroshenko praised his troops for “achieving the impossible” in repelling a rebel advance on the airport on Thursday, but his adviser Yuri Biryukov said the insurgents attacked even more intensively yesterday morning. He said it was the fiercest fighting in more than three months.

A ceasefire of sorts agreed in September and tightened in December reduced bloodshed without completely halting clashes and artillery fire that since April have killed more than 4,800 people, injured more than 10,000 and displaced about one million.

“I hope common sense will prevail in Kiev and president Poroshenko will not give into efforts by the ‘party of war’ to break the Minsk agreements.”

The ceasefire deal and broad framework for an eventual peace agreement signed in Minsk in September are still regarded as the best basis for ending a conflict that has ravaged Ukraine and relations between Russia and the West.

A planned summit of Ukrainian, Russian, German and French leaders was cancelled this week, and talks in Minsk between envoys from Kiev, Moscow, the insurgents and western intermediaries failed to take place as intended yesterday.

Ukraine’s financial situation continues to deteriorate, meanwhile, and the World Health Organisation (WHO) said yesterday it needed at least €19 million to help prop up the collapsing medical system of the disputed Donetsk and Luhansk regions.

Having cut off services in separatist-held areas, Kiev has asked the WHO to assist in a region where the organisation estimates that 5.1 million people are facing a humanitarian crisis, including 1.4 million who are deemed “highly vulnerable”.