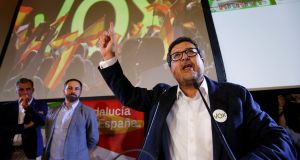 The involvement of Spanish far-right party Vox in a new governing agreement for Andalucía has ended four decades of Socialist rule in the southern region and been labelled a “pact of shame” by critics.

The 12 seats Vox secured in last month’s regional election announced its arrival as a new force in Spain. The result also meant that the Popular Party (PP) and Ciudadanos, both on the right, required its support in order to form a new government.

On Wednesday Vox agreed to back PP candidate Juan Manuel Moreno as the new president of Andalucía in an investiture vote expected to take place next week. Vox will not be part of the new government, which will be a PP-Ciudadanos coalition, but the party believes its influence will be felt.

“We said we wouldn’t be an obstacle to change or a doormat for others to walk over,” tweeted Vox’s leader, Santiago Abascal. He added that the 400,000 people who voted for his party will have a government “committed to implementing a large part of Vox’s manifesto”.

During negotiations with the PP, Vox made a series of controversial demands, including the withdrawal of funds and legislation supporting feminist and LGBT organisations, the immediate repatriation of 52,000 undocumented migrants and celebrating the re-conquest by Christians of Muslim-occupied Spain in the 15th century.

However, those measures were not included in the final agreement. Instead, Vox gained concessions in other areas, committing the new government to promote bullfighting and hunting in the region. In addition, the PP agreed to roll back an existing historical memory law in Andalucía that Vox claims offers a skewed version of the 1936-39 civil war and ensuing dictatorship.

Vox, which opposes abortion, has also ensured that women with unwanted pregnancies will receive extra information and support in an effort to dissuade them from having terminations.

But although Vox’s original demands were watered down, Spain’s Socialist government portrayed the pact as a lurch to the hard right for Andalucía and, in a statement, warned of “a drift towards male chauvinism and xenophobia”. “Our government has a commitment to the constitution and to democracy,” the statement added. “This [central] government will be vigilant and will not give ground in the conquest of rights and freedoms.”

The speaker of the Catalan parliament, Roger Torrent, labelled the governing deal “the pact of shame”.

The new right-wing administration in Andalucía is seen by many as a possible blueprint for other regions following upcoming local elections in May.

However, both the PP and Ciudadanos have seen dissent within their own ranks due to the dealings with Vox, particularly given its hard-line stance against what it calls “supremacist feminism”.

The PP’s Ana Pastor, who is the speaker of the Spanish parliament, on Wednesday called on parties not to “make political use of women”.