Donation from Quandt family was made two weeks after federal election 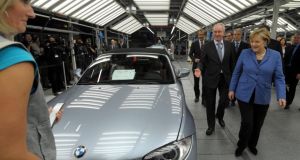 While Angela Merkel hunts for a coalition partner, her Christian Democratic Union (CDU) has confirmed it received a €690,000 donation from the family that controls BMW.

The Quandt family made its donation last Wednesday, two weeks after the federal election and almost one week before Monday’s EU meeting at which Berlin successfully postponed agreement on new, lower car-emission limits that hit large car makers.

The revelation has revived discussion about the influence of industrial lobbying on politics. “Germany likes to stand up for transparency and democracy around the world but hasn’t tidied up on its own doorstep,” said Christina Deckwirth of the Lobbycontrol research group.

She says the timing of the donation is particularly problematic, suggesting it was made after the election to avoid negative campaign publicity.

Ms Deckwirth said there was no clear link between the donation and Monday’s meeting of European environment ministers to discuss car emissions, following an earlier postponement in June under the Irish EU presidency. “But we just see it as part of the continual lobbying that goes on by the auto industry,” she said.

Big donors
Germany’s car firms – VW, BMW, Daimler – are an economic force and one of the country’s largest employer, and the biggest political party donors.

Financial donations to political parties above €50,000 must be declared, but critics of its lobby system say about three-quarters of donations are divided up to circumvent declaration rules. Berlin has signed but not ratified the 2003 UN convention against corruption while the Council of Europe has criticised Germany for not implementing its 2009 bribery and party financing recommendations.

Political contacts
Germany has no political cooling-off period, allowing companies to buy in politicians, their expertise and contacts. After leaving office, ex-chancellor Gerhard Schröder worked for the Gazprom consortium which benefited from his political backing for a Baltic Sea pipeline.

Transparency International’s Berlin office has drawn attention to a practice whereby lobby groups financed up to 100 employees inside government ministries in the last parliamentary term.

It is also campaigning for a “legislative footprint”, to expose laws drafted by lobby groups and their lawyers.

No one is sure how many interest groups operate in Berlin. An official lobby register lists more than 2,000 organisations but the real figure is estimated to be at least twice that.

One German magazine joked recently that they are so many brass plates up and down Unter den Linden, the boulevard leading to the Brandenburg Gate, that it should be renamed “Unter den Lobbyists”.

Billboard demands
Opposite the boulevard’s Cafe Einstein, a popular watering hole for politicians and their industry admirers, one well-funded employers’ lobby group snapped up a huge advertising hoarding after the federal election to press their demands on any new government. In January the same group sent government MPs a New Year’s present: a set of needles and a voodoo doll emblazoned with the words “minimum wage”.

Four days after the September 22nd poll, a Berlin hotel hosted an all-day seminar entitled Parliamentary Lobbying for Interest Groups with sessions including “What to do immediately after the election?” and “What to do when the coalition agreement is signed.”

“As with every election,” said Dr Hubert Koch, a lead speaker at the conference, “interest groups lose many members of their network through MP exits – planned or unplanned.”

A textbook example of unplanned exits can be seen in the fate of the Free Democrats (FDP). Months after taking office in 2009 they pushed through a VAT reduction for the hotel industry, widely ridiculed as pure lobby politics.

It haunted the party for four years and, last month, the party was ejected from the Bundestag after 64 years.