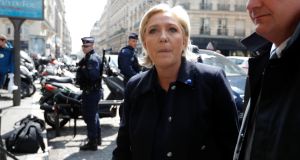 The Holocaust came back to haunt Marine Le Pen’s presidential campaign again on Friday, just nine days before the second round of the French presidential election, which the leader of the extreme right-wing Front National (FN) is expected to lose to the centrist Emmanuel Macron.

Le Pen’s partner Louis Aliot, one of several FN vice-presidents, announced that Jean-François Jalkh was stepping down as interim president of the party, to be replaced by Steeve Briois, the mayor of Hénin-Beaumont, an FN stronghold.

Le Pen temporarily resigned as leader of the party on April 24th, saying she wanted to be “above partisan considerations”.

Journalists discovered a speech by Jalkh, an FN old-timer, in which he quoted the Franco-British Holocaust revisionist Robert Faurisson in questioning the use of Zyklon B gas in Nazi gas chambers.

By contrast, Macron on Friday visited the ruins of Oradour-sur-Glane, where a Nazi Waffen-SS company massacred 642 people in June 1944.

For six years, Le Pen’s strategy to “undemonise” the FN has centred on distancing the party from her father Jean-Marie Le Pen’s second World War negationism.

Ever the provocateur, Le Pen père said on Friday that the homage to Xavier Jugelé, the policeman murdered on the Champs-Élysées in Paris by a would-be jihadist on April 20th “celebrated the homosexual more than the policeman”.

Unlike her father, Le Pen “does not say the camps did not exist, or that the Nazi occupation wasn’t so bad. That’s a big change”, Jean-Yves Camus, an expert on the FN and the extreme right in Europe at the Fondation Jean-Jaurès, told the Anglo-American Press Association.

Le Pen nonetheless tripped over the issue before the first round, when she insisted that France was not responsible for the deportation of Jews, because the Vichy collaborationist regime was illegal. “On the second World War and anti-Semitism, she finds it impossible to remain silent,” Camus said. “She says the same thing about Algeria and colonisation. France is never guilty.”

Le Pen has sued French newspapers for referring to the FN as extreme right. It is a non-issue, Camus says. “She’s beyond the pale on Europe and immigration . . . Jean-Marie used to say: ‘If I’m elected we’ll leave the EU.’ She says the same. ‘If I’m elected, we’ll stop immigration.’ She says the same. ‘I’ll silence everybody who disagrees with me.’ Look at the attacks she’s made on the media, on civil servants, on all who don’t agree with her policies. I don’t see any big difference.”

So could she still defy the odds to become France’s next president? “The possibility is very slim, but it exists,” Camus admits. The outcome will depend on turnout and the redistribution of first-round votes.

At 79 per cent, turnout in the first round was 10 points higher than polls predicted. “I think the French will vote,” Camus says.

Le Pen hopes to win over those who voted for the far-left candidate Jean-Luc Mélenchon, the conservative candidate François Fillon, and the renegade conservative Nicolas Dupont-Aignan.

Together, these three candidates – whose programmes bore certain resemblances to Le Pen’s – won 44.38 per cent in the first round. If the 21.3 per cent who voted for Le Pen in the first round remain faithful, and in the unlikely event she convinced close to two thirds of Mélenchon’s, Fillon’s and Dupont-Aignan’s voters in the second, she would become France’s next president.

Le Pen told French television this week that her programme is “very close” to Dupont-Aignan’s. Some conservative officials, including the Catholic fundamentalist Christine Boutin, have endorsed Le Pen. Dupont-Aignan, who won 4.70 per cent of the vote, is wavering.

Mélenchon’s voters are a bigger prize. Le Pen made a blatant appeal to them on April 25th, asking if they could “seriously imagine voting for Emmanuel Macron, who announced a lightning social war by decree as soon as he’s elected?”

The far left candidate angered many by refusing to state a preference for Macron over Le Pen. “Mélenchon is one of those left-wing radicals who believe that capital and the extreme right are two sides of the same coin,” Camus explains. Mélenchon’s followers demonstrated in Paris, Rennes and Toulouse this week, rejecting both finalists. “Neither Le Pen nor Macron. Neither fascists nor bankers,” their placards say.

If Le Pen performs poorly in the second round, rivalry with her young, attractive niece, Marion Maréchal Le Pen, will be exacerbated. Jean-Marie Le Pen and Maréchal Le Pen believe she focused too much on Europe and not enough on immigration, identity and conservative values. “Marion Maréchal Le Pen will say, ‘If you had listened to me, results would have been better.’” Camus predicts.

French voters do not really like Europe. They think it functions badly, but they are worried that the “Frexit” advocated by Le Pen would make their lives worse, Camus says. “Younger voters were raised with the euro. They want to change negative aspects of Europe, but they cannot imagine life without it.”

Le Pen appeared to soften her anti-European rhetoric this week, when she said: “I’m not an adversary of Europe. I feel European. I want there to be freely agreed accords between nations. That’s the Europe I want to emerge, and I want France to be at the origin of this beautiful initiative.”

It is a coded message, Camus explains. “Many on the extreme right talk about European civilisation, meaning white civilisation, as opposed to the Middle East or Africa. When small, extreme right-wing groups advocate European nationalism, they mean white Europe, without immigration.”

The European Commission has prepared “talking points” that would portray Le Pen’s defeat on May 7th as “three for Europe, zero for the populists,” Le Monde reported. The phrase refers to the defeats of the Austrian presidential candidate Norbert Hofer last December, and Geert Wilders, leader of the Dutch Party for Freedom, in March.

A Le Pen defeat would not mean that nationalist populism has peaked, Camus cautions. Hofer won 46 per cent of the vote, a performance the Freedom Party’s late leader, Jorg Haider, never dreamed of. And Wilders came in second, with 30 seats in the Dutch parliament.

“You can get 20, 30, 45 per cent of the vote and still be in opposition,” Camus says. “We have absolutely no reason to believe the job market will improve, that the negative impact of globalisation will stop. There may be a dip in the FN vote, but it can rise again.”

Storm Gloria leaves eight dead and three missing in Spain 16:56
Eyewitness to Auschwitz: ‘We were held in the wagons like animals’ 16:34
Trump criticises ‘hoax’ impeachment trial as he departs Davos 13:47
Greek islanders protest over crowded migrant camps 10:37
Fears of pandemic grow as coronavirus spreads beyond China 09:42

1 Election 2020: 10 key questions to ask candidates on your doorstep
2 Election 2020: Peter Casey to stand in both Donegal and Dublin West
3 Which jobs do teenage girls and boys aspire to have by age 30?
4 Fianna Fáil promises to postpone rise in pension age
5 Eyewitness to Auschwitz: ‘We were held in the wagons like animals’
Real news has value SUBSCRIBE