With recession and 10% unemployment, the Finns face pressure to bring debt into line 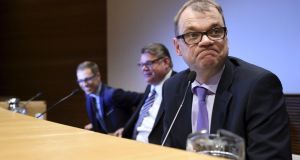 Prime minister of Finland Juha Sipilä: agreed to prioritise a revival of Finland’s stalled economy. It has been hit by Nokia’s sale of its mobile phone business to Microsoft and EU economic sanctions on neighbouring Russia. Photograph: Martti Kainulainen/Lehtikuva/AFP

Prime minister designate Juha Sipilä, head of the Centre Party, announced yesterday afternoon his plan to bring the controversial party in from the cold for formal coalition talks starting this afternoon.

“This was the best option. The biggest challenge is the economic situation,” said Mr Sipilä at a press conference. “We need a strong coalition that is capable of planning reforms and can implement those decisions.”

Mr Sipilä’s party won last month’s general election but with just 49 seats in the 200- seat parliament, it needs partners for a majority. His choice fell on the Finns Party, which finished second with 38 seats, and the last coalition’s liberal National Coalition Party (NCP) of outgoing prime minister Alexander Stubb.

After three years of recession and with a rising jobless rate of 10 per cent, Finland is facing pressure from Brussels to bring debt in line.

Mr Sipilä, a 53-year-old IT millionaire, has vowed to present a 10-year plan of cuts, reforms and growth measures to reverse the economic decline exacerbated by an ineffective left-right coalition in the last term.

Finnish economists say the new coalition will have to cut about €6 billion in its next budget, though others say the cost of a rapidly ageing population means the real cut will be closer to €10 billion.

With the coalition talks under way from today, Finland’s neighbours will be anxious to see what cabinet post Mr Soini will get. The 52-year-old Finns leader has trenchantly criticised bailouts, which he dubs “EU-IMF pyramid schemes”.

He is determined to take either the foreign or finance portfolio, but analysts suggest he may have to soften his hard line on Greece, particularly if a third bailout is needed.

He has competition for the finance job from former EU commissioner and senior Centre Party figure Olli Rehn, who wants to impose an “Irish- style solution” on the Finnish economy.

NCP leader Mr Stubb, meanwhile, has expressed interest in the foreign minister job, which he held until 2011.

Critics of Mr Soini and his party accuse them of coarsening political debate in Finland with a hard line on immigration and regular scandals involving political extremists and Nazi salutes.