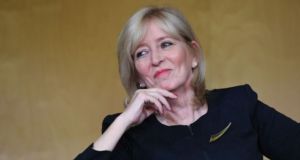 Emily O’Reilly: Her work has increased the office’s focus on transparency in the institutions. Photograph: AFP/Getty Images

European Ombudsman Emily O’Reilly appears set for re-election to the post following a remarkable poll-topping vote in the first round of voting on Tuesday by MEPs in Strasbourg.

The Irish woman took some 240 votes, well ahead of the second-placed Estonian Julia Laffranque on 162 - the other three candidates took 187 votes, while 103 abstained.

The vote is short of an absolute majority of 293, however, and Ms O’Reilly will face a run-off on Wednesday.

Ms O’Reilly, formerly Ireland’s first female ombudswoman and a distinguished journalist, was first elected European Ombudsman in 2013 and then in 2014 for a five-year term.

Her work has increased the office’s focus on transparency in the institutions, and she had a notable success when the Commission recently announced new procedures for the appointment of its general secretary.

The speedy elevation in 2018 of Martyn Selmayr, Jean-Claude Juncker’s chef de cabinet, to the job of heading the EU services as secretary general was a cause of scandal, particularly among MEPs. He had successfully maneuvered himself into a job that almost no-one else knew was vacant without serious competition.

Ms O’Reilly’s inquiry into the affair was extremely critical of commission procedures and found “maladministration” in its work. It resulted in the new commission under Ursula Von der Leyen requiring that in future the job be advertised with a proper timeline and be advertised distinctly from other posts.

The Ombudsman’s office under Ms O’Reilly, who is paid some €268,000 a year and is the senior Irish official in the EU institutions, has focused increasingly on transparency and accountability issues within the institutions.

Among the issues she has championed is the publication of the details of member states’ voting records within council meetings and the need for more effective monitoring and rules on lobbying, particularly the length of time officials must put between their service in the institutions and work for lobbying groups.

She recommended ECB president Mario Draghi be required to resign from the Group of 30’s banking and academic conference. The Group of 30 describes itself as a consultative group on economic and monetary affairs

In 2018 the Ombudsman’s Office “helped” 17,996 citizens with inquiries and opened 490 formal inquiries into complaints.