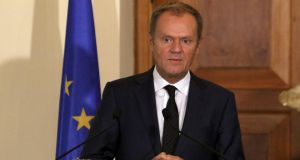 European Council President Donald Tusk has summoned EU leaders to an extraordinary summit next Wednesday to discuss migration and a proposed scheme to redistribute 120,000 asylum seekers across the 28-nation bloc.

European Union interior ministers failed on Monday to agree on a quota system designed to spread the burden of this year’s huge influx of migrants into Europe, many of them fleeing conflict in Syria and Iraq.

Tusk said in a tweet on Thursday that he had convened a summit on Wednesday, September 23rd, to deal with the refugee crisis.

Ministers are due to revisit the mandatory relocation plan at an emergency meeting on Tuesday after the European Parliament endorsed it on Thursday, with diplomats keen to avoid a new failure.

Hungary, Slovakia, the Czech Republic, Romania and Poland, all former communist countries that joined the EU a decade ago, are the main opponents of compulsory quotas, arguing that they would draw more migrants to Europe and disrupt their societies, which are not accustomed to large-scale immigration.

Hungary rejected the scheme even though it, along with Greece and Italy, would be sending asylum seekers to other European states rather than taking them in. Budapest argues that most of the migrants arriving on its border first entered the EU in Greece, hence it should not be treated as a frontline state.

Germany and France, the main recipients of relocated asylum seekers, may resist a voluntary system because they would likely end up with more refugees than under mandatory quotas. – Reuters