Europe must decide what to do about Hungary’s Viktor Orbán 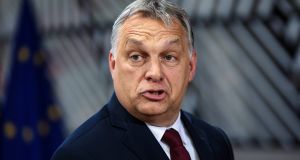 When Hungarians demonstrated recently in Germany against their own government one of the placards touched a local sore point: “Weber, where is your red line?”

The EU-wide campaign of Bavarian MEP Manfred Weber to be nominated for the presidency of the European Commission on behalf of the European People’s Party (EPP) involves the unfortunate embrace of one of the party’s less democratic members – Hungary’s Victor Orbán, a champion of what he boasts euphemistically is its “illiberal democracy”.

In September the European Parliament triggered the article 7 treaty procedure against Hungary for democratic governance and human-rights violations. And, to the intense embarrassment of the EPP, Orbán has becoming a rallying point throughout the EU for the anti-immigrant right – he recently spoke of his hope that the next European Parliament will be dominated by anti-immigration parties.

His party Fidesz’s continued membership of the EPP is now being called into serious question. A question that, as the placards point out, Weber has so far evaded.

“You have the right to know what Brussels is planning to do,” the poster says, accusing both men of wanting to undermine “member states’ rights to protect their own borders …”.

The 12 seats that Fidesz is likely to command in the European Parliament are clearly important to the EPP, which is already expected to lose seats. Even in combination with the Socialists & Democrats, they will be some way short of a majority.

“Pragmatists” in the EPP have been loath to support Fidesz’s expulsion. But now more voices are being raised and well-placed sources believe a crunch moment may soon be at hand.

Last week Sweden’s Moderate Party said it would push for the expulsion. Sara Skyttedal, party-lead candidate in the European elections, said “there must be a community of values around the basic principles of a democratic rule of law,” and added: “We see that Fidesz can no longer be said to fulfil this fully.”

A Moderate Party MEP, Gunnar Hökmark, a longtime advocate for excluding Fidesz, wrote in an email to Weber and all EPP MEPs that Orbán’s campaign “is an attack that could just as well have been initiated by [French far-right leader Marine] Le Pen or by [Russian president Vladimir] Putin.”

And Juncker made clear his support for such a move. “There is no overlap at all between Orbán and myself,” he said. “I believe his place is not in the European People’s Party.” Luxembourg party, the CSV, said it would raise the issue at the EPP conference in March.

According to EPP rules, the suspension or exclusion of a member party can be triggered by “seven ordinary or associated member parties from five different countries”.

Which all makes for an embarrassing dilemma for Fine Gael, loyal members of the EPP. A Fine Gael source believes the issue will come to a head soon, but suggests realpolitik considerations may trump any desire to strike a blow for liberal democracy and the traditional values of both Fine Gael and its European allies.

Orbán “has been very useful” to Taoiseach Leo Varadkar in the Brexit discussions, the source argues, and Varadkar may feel this in not the time to show ingratitude.

To the suggestion that Fidesz is a “cuckoo” in the EPP nest comes the familiar pot-calling-kettle-black retort that there “are a few cuckoos in other nests”. The Socialists, for one, embrace the Romanian governing party, which is up to its neck in corruption and rule-of-law violations.

Others fear that were Orbán to leave the EPP and join the right-wing populist camp, the whole European election campaign would become a pro- versus anti-European affair. Arguably, it has already become that, but an Orbán association with the populists would certainly strengthen them.

There is also concern about “contamination”. Even within the party, some may be tempted to follow the Orbán example. And only this week another EPP leader, Austria’s 32-year-old chancellor Sebastian Kurz, took a leaf out of the Orbán playbook by announcing a new form of preventive detention for asylum seekers deemed to be a threat, without court supervision.

Austria’s interior minister Herbert Kickl, of the far-right FPÖ, said the detention was intended for “someone who has already strapped on an explosive belt in his mind”. He claimed Austria would not be the first EU country to make such a detention legally possible: Ireland, Hungary, and two others had adopted similar measures, he said.

A statement by the Department of Justice, however, said “There is no basis in Irish law to detain migrants for security reasons without recourse to the courts.”