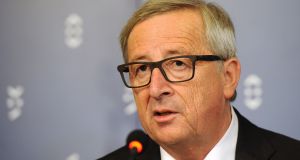 Jean-Claude Juncker: criticism of the European Commission President has been brought to the surface by Brexit, with eastern European member states and the British and German press leading the charge. Photograph: Samuel Kubani/AFP/Getty Images

Almost two weeks since the British referendum on EU membership, the European Union is still reeling from the result.

In Brussels and Strasbourg a strange sense of paralysis has taken hold, as the mysterious momentum that propels the EU machinery has dissipated.

“Typically at this time of the year everyone is rushing to get things through before the August break,” said one parliament official this week in Strasbourg. “This year no one knows quite what to do.”

As member states ponder Britain’s unique half-in, half-out relationship with the European Union, a myriad of questions present themselves. While British officials will continue working in the EU until their country’s departure, awkward questions remain. Should British officials really be permitted to shape policies from which they will be excluded in a few years? Is continuing British presence around the EU Council table in Brussels giving Britain unfair advantage ahead of the forthcoming negotiations?

The status of some legislation is in limbo. For example, a forthcoming climate emission package which had been due to be announced on July 20th may be delayed. The proposal – which is hugely important for Ireland given the country’s challenge in reaching EU emissions targets – includes detailed emissions calculations for each member state, including Britain.

This week there were some signs that the EU legislative process was churning back into action. EU commissioners meeting in Strasbourg announced two important measures. A decision was taken on the EU-Canada trade deal, though in a move that could have serious implications for both the EU-US trade deal and Britain’s future trade negotiations with the European Union, they conceded that national parliaments would have to ratify the agreement.

Secondly, in a sign that British influence may already be slipping, EU economics commissioner Pierre Moscovici proposed new tax rules on offshore funds and trusts, a measure that Britain had previously opposed.

Criticism of Jean-Claude Juncker has been brought to the surface by Brexit, with eastern European member states and the British and German press leading the charge. The Observer on Sunday called on Mr Juncker to stand down, while the Sunday Times reported that the commission president is under pressure from German chancellor Angela Merkel to resign.

The Polish and Czech foreign ministers have suggested in recent weeks that the former Luxembourg prime minister is not the right man for the job, while Juncker himself was forced to defend his position last week, telling MEPs in the European Parliament: “I’m not tired. I’m not sick as newspapers in Germany write. I am what I am. To my last breath I will fight for Europe, for a united Europe.”

An intervention by Joseph Daul, chairman of the European People’s Party, on Twitter on Monday defending Juncker was deemed to be misjudged by some in the EPP group who read it as an admission that something was afoot.

While the consensus is that Juncker has no intention of resigning, tensions between the three main EU institutions have deepened in the wake of the British referendum.

It took EU leaders, under the navigation of German chancellor Angela Merkel and backed by European Council president Donald Tusk, to convey the message that this was not the time for talk of federalism and more Europe.

The balance of power between the European Commission and the European Council which represents member states is likely to be a central theme of the September EU summit in Bratislava.

Already, east European countries have argued that more power should be invested in member states rather than the European Commission.

But as the EU looks for someone to blame in the wake of the British referendum, in reality the possibility of a high-profile resignation from the Commission is unlikely.

The European Union cannot afford instability and uncertainty at this juncture. For Brussels, as much as for Britain, the mantra of “keep calm and carry on” has never seemed so apt.