EU Commission president Ursula von der Leyen, speaking in her maiden State of the Union speech, has said that the European Union "will never backtrack" on peace in Ireland. Video: European Commission 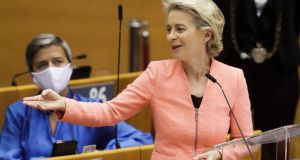 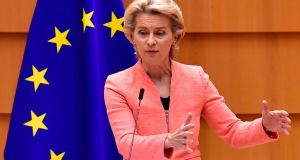 Europe must use green investments to relaunch its economy in the wake of the Coronavirus pandemic to reshape it for the future, EU Commission president Ursula von der Leyen has said in her maiden State of the Union speech.

The address, a set piece of the Brussels calendar given once a year by commission chiefs to set out their vision for the EU and plan for the coming year, focused on the need to defend international cooperation and rules-based order, confront climate change, and better defend human rights at home and abroad.

She unveiled a plan to cut carbon emissions in the bloc by 55 per cent before 2030 compared to 1990 levels – an increase on a previous commitment of 40 per cent – saying that Covid-19 had revealed the importance of acting fast.

“A virus a thousand times smaller than a grain of sand exposed how delicate life can be,” Dr von der Leyen told politicians in the European Parliament.

“It laid bare the strains on our health systems and the limits of a model that values wealth above wellbeing. It brought into sharper focus the planetary fragility that we see every day through melting glaciers, burning forests and now through global pandemics.”

A landmark agreement earlier this year to jointly borrow €750 billion to counteract the economic impact of the pandemic was an opportunity to achieve all of this, the president said.

Her speech was wide-ranging, covering the need for the EU to defend the global cooperation systems, increase cooperation in health, agree on a common system to manage migration, and confront the reality of discrimination and inequality in the bloc. Such proposals by the commission are made in coordination with EU member states, and must be approved by the EU’s national leaders and by the European Parliament to become a reality.

In a section of her speech that called out incidents of racism against black, Jewish, and Roma people in the EU and the US, Dr von der Leyen quoted the late Nobel laureate and former SDLP leader John Hume, describing him as “one of the great Europeans who sadly passed away this year”.

“If so many people live in peace today on the island of Ireland, it is in large part because of his unwavering belief in humanity and conflict resolution,” she said.

“These words are just as important today as they ever have been.”

Her speech also name-checked Syrian teenager Suadd Alshleh, who won a scholarship to study medicine last year after arriving in Ireland aged 14 as a refugee.

When it comes to both the United States and Britain, there was a need for “new beginnings with old friends”, Dr von der Leyen said.

In the EU’s talks with Britain on a future relationship following its exit from the bloc, she admitted that “with every day that passes the chances of a timely agreement do start to fade”.

The commission chief vowed that the EU would stand by on the withdrawal agreement signed last year, which she said “guarantees our citizens’ rights, financial interests, the integrity of the single market – and crucially the Good Friday Agreement.”

“The EU and the UK jointly agreed it was the best and only way for ensuring peace on the island of Ireland,” Dr von der Leyen said.

“And we will never backtrack on that. This agreement has been ratified by this house and the House of Commons. It cannot be unilaterally changed, disregarded or dis-applied. This a matter of law, trust and good faith.”

Key points Health: A pledge to increase health cooperation to combat the Coronavirus pandemic and prevent future outbreaks, including setting up a new agency for biomedical advanced research and development to combat cross-border threats.

Minimum wage: Europe’s social protections made it more resilient to the damage of the pandemic, but too many workers have insufficient rights and pay. Dr von der Leyen praised the power of collective bargaining, and said that the commission will introduce a framework through which member states could set minimum wages.

Climate: Emissions targets should be tightened to a 55 per cent cut by 2030 from 40 per cent, to help the continent achieve its Paris Agreement obligations and carbon neutrality by 2050. Of the €750 billion in joint borrowing the EU has agreed to counteract the economic damage of the pandemic, 30 per cent should be in Green Bonds earmarked for climate investments. The commission also proposes a tax on imports into the bloc based on the amount of carbon released in their production.

Digital: Continent-wide fast broadband is needed particularly to allow rural areas to develop, particularly given the changes to work patterns accelerated by the pandemic. Dr von der Leyen called for increased investment in technology and skills development, while saying that 20 per cent of the €750 billion should be spent towards digital goals. She called for a global agreement on digital taxation through the OECD, but said if this was not forthcoming the commission would propose its own plan in the first half of 2021.

International relations: The EU should lead reform of the World Trade Organization and World Health Organization to make international cooperation more effective, and should adopt qualified majority voting on human rights and sanctions matters to make it easier for the EU Council to react to world events. Dr von der Leyen expressed solidarity for Belarus, had harsh words for Russia, and described China as a partner on climate issues, an economic competitor, and a systemic rival. Referring to the United States and Britain, Dr von der Leyen called for “new beginnings with old friends”.

Migration: The commission will next week launch proposals for a joint EU system to manage migration, something the bloc has tried and failed to agree since 2016. Dr von der Leyen said “saving lives at sea is not optional” and that more support was needed for frontier states with a disproportionate number of arrivals, and that the new proposals would make a “clear distinction between those who have the right to stay and those who do not”.

Discrimination: In a part of the speech that seemed heartfelt, Dr von der Leyen called for the building of a “truly anti-racist Union”, and condemned discrimination based on race, gender, sexual orientation, and religious belief. The commission is to launch an anti-racism action plan that will propose stricter prohibitions for hate crimes and hate speech