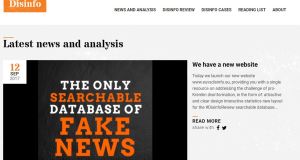 The Danes, if one is to believe the story, are opening brothels for zoophiles. They – the zoophiles, not the Danes – are people with a sexual fixation on non-human animals.

The story, which has run strongly on social media, started out on a distinctly marginal Russian website, Kolokol Rossii, which picked it up from a French site but omitted to mention the fact it was satire. It then ran strongly in Belarus and Georgia with pictures of a dog dressed up as a prostitute and a fictitious quote from a genuine Danish minister to the effect that sex with animals is a civil right.

All grist to the mill of those determined to show up the decadent West, like the story that sexual abuse in Norway is a family norm. Or that LGBT rights were a stalking horse for paedophilia. One headline even insisted that the EU was banning snowmen for being racist. Another that “Angela Merkel is the führer of the Fourth Reich”.

So preposterous that no one could take them seriously? Unfortunately that’s not the case.

And what has become increasingly clear is that many of such proliferating online fake news stories are not just the random expressions of the seamier side of internet excess, but part of a deliberate and effective disinformation campaign, one orchestrated by Moscow.

A study by the Wilfried Martens Centre of what governments across Europe and the US see as elements of a deliberate Russian campaign suggests it has already “effectively shaped Russian society’s perceptions of the EU”. A poll found that only one-quarter of Russians view the EU favourably and that the adjectives Russians used most frequently to describe the union were “hypocritical, multicultural, and decadent”, echoing the narrative of the online message.

– The EU is aggressive and interventionist. It wages an “information war” against Russia and plans to seize Russia’s resources. The EU forces its member states to adopt Russophobic policies, and plans to use the Eastern Partnership countries for relocating refugees, or as a radioactive waste dump.

– The EU has almost collapsed, as it is unable to face the challenges presented by the migration crisis. Minors are raped in Europe while the rapists are not even punished. Tolerance towards refugees caused terror attacks. Fascism and Nazism are on the rise.

– The EU is decadent. The whole West denies moral principles, while only Russia defends traditional values. Europe also attempts to legalise paedophilia. Democratic values, freedom of speech and gender equality are portrayed as major attacks on Christianity, and also a western attempt to deny the existence of Russian civilisation.

Russia is using methods of propaganda through proxy sites to undermine western governments, much as it attempted to do in both the US and French elections.

The messages abroad have been more political and strategic – stories about Sweden being about to be riven by civil war, as the country is allegedly torn apart by Muslim immigration.

The US has apparently sponsored at least 15 biological warfare facilities in Ukraine and in “400 countries” worldwide. And, of course, Russian ground forces have not operated in Syria.

RT (formerly Russia Today), the state-funded international TV station, which is a master at such disinformation techniques, has claimed that in the West microchips are implanted under the skin of office workers to make them more submissive and passive.

Such is the concern at the effectiveness of this fake news propaganda in some European capitals that defence ministers from Denmark and Sweden have pledged to co-operate on what are called hybrid threats, with a strong focus on fake news and disinformation. The newspaper Aftonbladet’s headline: “Russian fake news: a danger to our countries”.

One approach will be to make training in how to combat pro-Kremlin disinformation a “top priority” for the 200 Danish soldiers who will be deployed to Estonia as a part of Nato’s “enhanced forward presence”.

Meanwhile in Brussels, the EU’s diplomatic arm, the European External Action Service (EEAS), has been beefed up and this week relaunched a counter fake-news website to target and deconstruct the myths.

The site – “EU vs disinfo”, euvsdisinfo.eu – makes for compulsive reading, documenting the more far-flung claims – 3,000 in the last year – and tracking their emergence, from obscure Kremlin-linked websites to the mainstream outlets such as RT which are only too happy to recycle them.

It is a form of digital age “soft” warfare, complementing the ongoing battle also under way physically to take down illegal, violence-promoting terror sites.