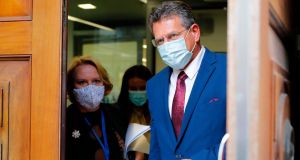 The European Union has threatened to take legal action against Britain if it does not reverse a controversial plan that would tear up Brexit-related guarantees aimed at avoiding a hard border on the island of Ireland.

All 27 EU members on Thursday sat in to observe emergency talks in London after the British government acknowledged it was prepared to break international law and reverse aspects of the Withdrawal Agreement.

During the meeting, the EU’s Maros Sefcovic told the British that proposing the new Internal Market Bill had “seriously damaged trust” and that Westminster must remove the parts that violate the treaty by the end of the month.

The EU side warned that progressing the Bill in its current form would be “an extremely serious violation” of the accord and the EU “will not be shy” in taking legal action if Britain does not back down.

London has insisted that the Bill is only a fallback in case a satisfactory arrangement cannot be found on how to implement the accord, which was agreed last year and guarantees that Northern Ireland would remain broadly in line with EU norms and enforce its customs code in order to avoid the need for checks on the boundary with the State.

“Vice-president Sefcovic ... requested the UK withdraw its internal market legislation. I explained to [him] that we could not and would not do that,” British cabinet minister Michael Gove said following the meeting.

His government released a legal opinion that argued its parliament was sovereign and effectively could do what it wished, including overriding an international treaty it approved and made law less than a year previously.

London has argued that the proposed Bill protects the Belfast Agreement, a claim strongly rejected by the EU, which stated “in fact ... it does the opposite”.

Taoiseach Micheál Martin told RTÉ that “trust has been eroded” and that he was not optimistic after Britain dragged the issue of Northern Ireland back into the centre of the talks.

Preparations for a no-deal Brexit are likely to be accelerated in the light of the British move. Senior sources say it is unclear if the British government would observe the rest of the terms in a crashout scenario, which could mean the question of border checks arises again.

The British government’s plan drew international criticism with a spokesman for French foreign minister Jean-Yves Le Drian saying he had pulled aside his British counterpart, Dominic Raab, during a conference about Iran in London and warned him that violating the agreement would be “unacceptable”.

Nancy Pelosi, speaker of the House of Representatives in the US, warned that Congress would not pass a US-UK trade deal if Brexit jeopardised the Belfast Agreement. “Their self-determination is up to them. Our trade relations are up to us,” she said.

The extraordinary meeting of the joint EU-UK committee, which oversees implementation of the Withdrawal Agreement, was said to be calm but tense.

Just weeks remain to reach a deal on the EU’s future relations with its former member state, with enough time to enact it before a transitional period runs out on December 31st.

Both sides said little progress was made in the latest round of talks this week in London, but have agreed to continue them in Brussels later this month. “To conclude a future partnership, mutual trust and confidence are and will be necessary,” the EU’s chief negotiator Michel Barnier warned.

“The EU is intensifying its preparedness work to be ready for all scenarios on January 1st, 2021.”