EU and Turkey agree on deal to send refugees back

Turkish Prime Minister, Ahmet Davutoglu, speaks to the media as he enters day two of an EU summit in Brussels. Video: EU Council 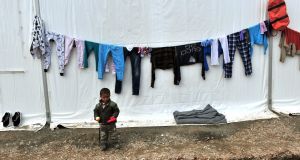 A migrant child stands at a makeshift camp at the Greek-Macedonian border, near the Greek village of Idomeni. Photograph: Sakis Mitrolidis/AFP/Getty Images

Irregular migrants arriving in Greece from this Sunday face being returned to Turkey under a new refugee deal agreed by the European Union and Turkey.

Under the agreement struck on Friday by Turkish prime minister Ahmet Davutoglu and EU leaders, all migrants arriving in Greece from March 20 will be sent back to Turkey. In exchange, EU countries will begin accepting 72,000 migrants from Turkey under a resettlement plan, though that figure will be reviewed.

Ankara signed up to the plan during a Friday morning meeting between the Turkish prime minister, the heads of the European Council and Commission and Dutch prime minister Mark Rutte whose country holds the EU’s rotating presidency.

Shortly after lunch European Council president Donald Tusk re-convened a meeting of all 28 EU leaders to consider the deal.

Other key elements of the agreement include the commitment to reopen Chapter 33 of Turkey’s accession negotiations with the EU by July, which deals with budgetary and financial matters. The reopening of five other chapters which have been blocked by Cyprus was not included in the final communiqué.

The agreement also doubles the EU’s financial pledges to Turkey to €6 billion from an initial €3 billion agreed in November, with the EU pledging to speed-up the dispersal of funds and identity key investment projects as early as next week.

A commitment to speed-up visa liberalisation talks with a view to lifting visa requirements for Turkish citizens at the latest by the end of June is included in the final draft text, though this is dependent on Turkey fulfilling already-agreed conditions and benchmarks.

Separately, the leaders of Britain, France, Spain, Italy and Malta, together the EU’s High Representative on foreign policy Federica Mogherini, met on the fringes of the summit to discuss the situation in Libya amid fears that a new wave of migrants could travel to southern Europe from Libya. Since Tuesday this week the Italian coastguard has picked up 2,400 migrants off the Libyan coast.

Responding to the deal, the Immigrant Council of Ireland warned that the “internationally-protected rights of men, women and children fleeing for their lives must not be sacrificed by the EU.”

“If this cynical agreement is implemented, for each Syrian that risks their life at sea another Syrian will have the chance to reach Europe from Turkey,” MSF’s Aurélie Ponthieu said.

Last night, all 28 EU leaders reached a common position on a draft agreement with Turkey, which contained few changes to the outlines of a deal agreed ten days ago.

Speaking late on Thursday night in Brussels, German chancellor Angela Merkel said the European Union must be ready to start returning migrants from Greece to Turkey rapidly to avoid a “pull factor” before the new system takes effect even though EU leaders had set no start date.