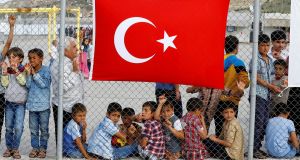 Refugees wait for the arrival of officials at Nizip refugee camp near Gaziantep, Turkey in April. Photograph: Umit Bektas/Reuters

Turkish president Recep Tayyip Erdogan has warned the European Union that his country may wave through up to three million migrants to Europe as Ankara reacted furiously to Thursday’s vote in the European Parliament calling on Turkey’s accession negotiations to be frozen.

Mr Erdogan said that Turkey could row back on the migrant pact signed with the EU in March, which has dramatically reduced the number of refugees entering the EU through Turkey.

As a condition of that deal, the EU promised to accelerate Turkey’s accession talks and consider granting visa-free access to Turkish citizens to Europe.

But concerns about the Turkish government’s increasingly authoritarian stance, as it clamps down on dissenters following July’s failed coup, has sparked calls for Turkey’s accession talks to be suspended.

Speaking in Istanbul on Friday, the Turkish president accused the EU of “betraying its promises”.

“If you go any further, these border gates will be opened,” he said, describing the parliament vote as a “dry threat”.

While MEPs voted overwhelmingly to freeze the EU’s accession talks with Turkey in Strasbourg on Thursday, the vote was non-binding.

But the symbolic power of the resolution is important.

Elections are looming in a number of EU countries next year, including France, Germany and the Netherlands, with anti-immigration parties expected to poll strongly.

As a result, incumbent governments are unlikely to want to commit to granting 78 million Turkish people visa-free access to Europe.

But, for Turkish citizens, the possibility of visa-free travel to the Schengen area would be a huge achievement, and there is a concern that Turkey may become increasingly frustrated at the lack of progress on the issue.

Turkey officially began accession talks with the EU in 2005, though the country has pushed for membership of the bloc for decades.

But in a potential change in policy, Mr Erdogan has said that Turkey should not become “fixated” on EU membership, suggesting that he may hold a referendum on the issue.

The president has also suggested that Turkey could join the Shanghai Pact, which includes Russia and China, as an alternative alliance to the EU.

Across Turkey more than 120,000 people have been dismissed from their positions in a government crackdown in the wake of the failed coup in July, while more than a dozen newspapers and publications have been closed.

But it is suggestions by Mr Erdogan that the death penalty could be reintroduced that has most alarmed EU officials.

Such a move would preclude Turkey from joining the EU, where the death penalty is outlawed.

The EU signed up to the controversial migrant deal with Turkey in March, following months of negotiations.

Under the pact, refugees arriving in Greece from Turkey were turned back to Turkey in a “one for one” swap, which would see Syrian refugees resettled direct from Turkey to migration camps.

The deal, which was championed by German chancellor Angela Merkel, prompted a sharp fall-off in the numbers making the perilous sea voyage from Turkey to Greece.

A spokeswoman for the German chancellor reiterated Berlin’s support for the migrant deal, which was in the “interest of all parties”, adding that “threats on either side are not helpful”.

Turkey has arguably done more to house refugees arriving from Syria than any other country, with up to three million refugees, mostly from Syria, living there.

The issue of Turkey’s future membership of the EU emerged as a key issue in the final weeks of Britain’s referendum campaign on leaving the EU.

Since then, British foreign secretary Boris Johnson has said Britain will support Turkey in its bid to join the bloc.