Eagles of Death Metal headline their first show in Paris since the deadly attack at the Bataclan concert hall on November 13. Video: REUTERS/COURTESY EAGLE ROCK ENTERTAINMENT

Jesse Hughes, lead singer of Eagles of Death Metal, gives an emotional interview in which he disscusses his thoughts on gun control ahead of the band's first concert in Paris following November's terrorist attacks. Video: iTélé 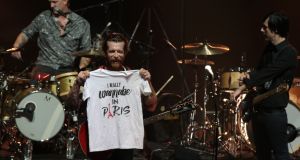 Jesse Hughes (centre), lead singer of the Eagles of Death Metal: Speaking on French television, Hughes, a Republican and supporter of the National Rifle Association, said “Did your French gun control stop a single f**king person from dying at the Bataclan?” Photograph: Joel Saget/AFP/Getty

The California rock group Eagles of Death Metal returned to Paris last night to complete the November 13th, 2015 concert that ended in a bloodbath when gunmen dispatched by Islamic State burst into the Bataclan concert hall and sprayed the audience with gunfire. A two-hour stand-off with security forces ensued, and 90 concert-goers were killed.

Last night’s concert took place at the Olympia, near the church of the Madeleine, under heavy police and army protection.

The Bataclan is still closed. Survivors of the massacre were offered free tickets. Psychologists were on hand to help them.

Hughes (43) is a self-avowed Republican and supporter of the National Rifle Association.

“Did your French gun control stop a single f**king person from dying at the Bataclan?” Hughes said on iTélé.

“I know people will disagree with me, but it just seems like God made men and women, and that night guns made them equal. I hate it that it’s that way. I think the only way that my mind has been changed is maybe until nobody has guns, everybody has to have them.”

Hughes wore greased-back hair and hot pink aviator glasses. On the verge of tears, he said he had “never seen anyone that’s ever had [a gun] dead, and I want everyone to have access to them, and I saw people die that maybe could have lived”.

“It’s a symbolic moment, a sort of catharsis to enable me, not move on – that’s impossible – but to get to a new stage,” Stanzick told Le Figaro. His wife chose not to attend the concert. “I feel irrevocably linked to the audience and the group,” he said.

Georges Salines, the president of the “November 13 Fraternity and Truth Association” complained of the government’s “atrocious lack of preparation”. He learned that his daughter Lola had died in the Bataclan via tweets from strangers.

Caroline Langlade is vice- president of the “Life for Paris November 13 2015 Association”.

She whispered when she telephoned emergency services from inside the Bataclan, so a nearby gunman would not hear her. The police operator hung up on her.

French authorities told Sophie Dias, whose father was killed by a suicide bomber outside the Stade de France, “Don’t worry if we don’t show you the head. You can see a foot.”

Yet, as Alexis Lebrun, a member of “Life for Paris,” noted, there were no searches and no police presence at the concert on November 13th.

“Paris was a failure of intelligence,” Brennan said on February 14th. “[Most of the] terrorists were French citizens, trained by Isis in Syria. They returned, unnoticed, and attacked six locations killing 130 people . . . We knew the system was blinking red. We knew just in the days before that Isis was trying to carry out something.”