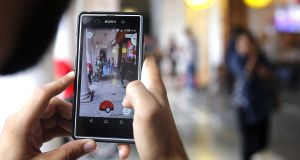 A Pokémon Go enthusiast tries to catch a Pokémon character after locating it in New Delhi, India. There has been a series of potentially serious mishaps suffered by players caught up in the “augmented reality” game. Photograph: Rajat Gupta/EPA

A Dutch bus driver has been fired after a video clip of him steering his coach with one hand and playing Pokémon Go on his phone with the other went viral in the Netherlands.

The Pokémon Go app has been downloaded more than 50 million times from the Google Play store, and this is just the latest in a series of potentially serious mishaps suffered by players caught up in the “augmented reality” game.

Earlier this week, the Australian government introduced a “Don’t drive and Pokémon” campaign after a 19-year-old motorist ploughed through a fence and crashed into the wall of a school in Melbourne while attempting to capture the illusive “pocket monster”.

On Thursday evening, an RNLI lifeboat had to be launched in the English coastal resort of Weston-super-Mare to rescue six over-enthusiastic teenagers who went searching for the Pokémon on an island which is cut off from the shore and largely submerged at high tide.

The Dutch bus driver, meanwhile, became an instant national celebrity after a passenger sitting behind him captured video on his mobile phone showing him engrossed in the game while driving his coach on the N11 motorway.

The driver is wearing sunglasses in the video clip and is seen in profile – but clearly enough for his employers to recognise him instantly, cruising on the busy road behind another bus.

The driver’s employers were furious when the video showing him with his left hand on the steering wheel and his right holding his phone was posted online – and spread like wildfire as a result of the Pokémon craze.

The private coach company was providing a temporary service for the Dutch train operator, NS, linking two railway stations – and said that when the NS social media department spotted the posts, they were urged by NS to “take appropriate action” immediately.

“We are professional drivers – and this is completely unacceptable,” said a spokesperson for the coach company.

“It wouldn’t be ideal if any of our passengers saw him at the wheel again in future. We are working on a plan for his future – but it won’t be with us.”

An NS spokesperson confirmed that when they saw the pictures they were “shocked”.

In the US, police have urged Pokémon Go players to remain vigilant while playing the game on their phones or other mobile devices in public.

“When you’re caught up in a game and not paying proper attention to what’s going on around you, your situational awareness can go down – and that is potentially dangerous.”