Ceasefire effort must go on despite latest violence against civilians, says EU envoy 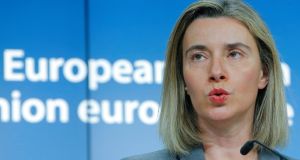 The EU’s foreign policy chief ruled out any change of approach to peace efforts in Syria despite military strikes on hospitals and schools which left dozens of civilians dead on Monday.

Aid agency Médecins Sans Frontières said at least seven people were killed and eight more were unaccounted for after a hospital in Ma’arat Al Numan, in the north of the country, was hit by four missiles in two air attacks in quick succession. The destruction of the hospital appeared to be a “deliberate attack on a health structure”, the agency said.

In addition, 14 people were believed to have been killed when a school sheltering refugees and a hospital in Azaz, eight kilometres from the Turkish border, were hit by missiles, according to reports.

“What happened today is completely unacceptable and we will continue to pressure all the parties to respect basic principles of humanitarian law and focus on protection of civilians,” the EU’s high representative for foreign affairs, Federica Mogherini, said following a meeting of EU foreign ministers in Brussels.

But she stressed that last week’s ceasefire deal in Munich would continue to be pursued. “We knew already on Thursday evening in Munich it was a difficult process. This is not a reason to change policy after just four days.”

As condemnation of the killing of civilians intensified, Russia’s health minister said she had no reason to believe Russian air strikes were responsible. She reiterated that Russia’s target was Islamic State.

But Turkish prime minister Ahmet Davutoglu blamed Russian warplanes for the attacks. Speaking during a visit to Ukraine, Mr Davutoglu accused Russia of behaving like a “terrorist organisation” and warned it to expect an “extremely decisive response” if it continued a bombing campaign in northern Syria that is allegedly targeting civilians and forcing thousands to flee.

“If Russia continues behaving like a terrorist organisation and forcing civilians to flee, we will deliver an extremely decisive response,” he said. “Unfortunately, barbaric attacks on civilians are continuing in Syria and these attacks are being waged by both Russia and terrorist groups.”

Tension between Ankara and Moscow has worsened rapidly since the Kremlin launched air strikes in Syria in late September to support government ground forces, and a Turkish jet shot down a Russian jet over the Turkey-Syria border in November.

The Russian air campaign has helped the forces of Syrian leader Bashar al-Assad make gains against the country’s rebels, some of which have Turkish and US backing, and Syrian Kurdish forces have also advanced in areas near Turkey.

Mr Davutoglu said on Monday that his country would not allow Kurdish forces to take Azaz, and for a third day Turkey’s army shelled the positions of Kurdish fighters.

“We will not allow Azaz to fall,” Mr Davutoglu said, claiming that only Turkish artillery fire had prevented fighters from the Kurdish YPG group taking Azaz. “If they approach again, they will see the harshest reaction.”

He cautioned that Turkey would render the Menagh air base, north of the city of Aleppo, “unusable” unless the YPG, which seized it at the weekend, swiftly withdrew.

Mr Davutoglu also warned the YPG not to move east of the Afrin region or west of the Euphrates river, highlighting Ankara’s fear that expanding Kurdish influence in Syria could embolden Kurdish groups inside Turkey.

Russian bombing has allowed Mr Assad’s forces to move closer to the city of Aleppo, sending another wave of displaced people to the Turkish border, where they are now blocked.