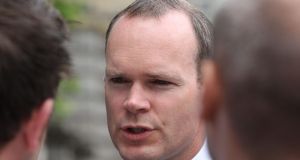 Minister for Agriculture Simon Coveney: promised that the registration of meat traders and agents would be “vigorously pursued”. Photograph: Alan Betson

It is two months today since the Food Safety Authority of Ireland informed the public that horse meat had been found in frozen beef burgers.

Linking horse meat and beef products was like turning on a tap. The revelations came gushing out, involving household names such as Tesco, Nestlé, Findus, Birds Eye, Ikea and Burger King. They finally slowed to a trickle in the last few weeks. And as recently as Tuesday there was another product withdrawal as Tesco removed frozen meatloaf containing 2-5 per cent horse.

Questions
Yesterday’s publication of the Department of Agriculture’s report on its investigation provides a welcome update, but it raises as many questions as it answers. The biggest question is: will anyone be prosecuted for their role in this debacle?

While the investigation clears a number of parties of knowingly buying or using horse meat, namely Rangeland Meats, McAdam Foods and Silvercrest, it is scathing of the latter for its “inexcusable failure” in failing to ensure the authenticity of its products. It also reveals the shocking news that QK Meats in Naas found horse meat in beef product last June and told no one. And it continued to source raw material from Poland, paying €400 per tonne less than it would have paid for Irish beef trimmings. What sanctions will it face for the “scant regard for the public good” described in the report?

False labelling
The false labelling of horse meat as beef by B&F Meats in Carrick-on-Suir is also criticised and the Department of Agriculture continues to hold the threat of legal proceedings over the company. But the sheer brazenness uncovered at Ossory Meats leaves B&F in the halfpenny place.

However distasteful the revelations have been, there is no doubt that the debacle has been good for us. It has ensured that people ask more questions about what they eat and where it comes from. It has led to Minister for Agriculture Simon Coveney promising that the registration of meat traders and agents would be “vigorously pursued”.

DNA-testing is now widespread in the meat industry and the results of the first batch of EU-wide tests are due next month. Much more needs to be done, particularly around the traceability systems for horses, but it is a start.

We can have more confidence in our food now than we did when someone tweeted the first horse burger joke on January 15th.