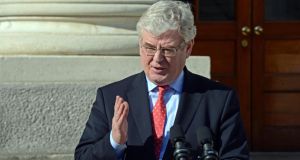 Tánaiste Eamon Gilmore: ‘We are monitoring the situation very carefully, particularly in eastern Ukraine. There is an urgent need for a de-escalatation of the crisis and for Moscow to engage in serious dialogue with Ukraine’s interim government.’ File photograph: The Irish Times

There was “a degree of coordintion” behind events in Ukraine over recent days during which pro-Russia elements seized control of state owned buildings in the east of the country, Tánaiste Eamon Gilmore has said.

Speaking ahead of a meeting of EU foreign ministers in Luxembourg today, Mr Gilmore said the foreign affairs council would focus on what’s happening in Ukraine and on deteriorating EU relations with Russia.

The meeting comes as tensions increase in east Ukraine where pro-Russian elements have taken control of several state buildings in Slaviansk. An ultimatum issued by the Ukraine government yesterday threatened military intervention if protesters failed to vacate the buildings in question by this morning.

The deadline passed at 7am Irish time but there were no outward signs of protesters obeying the Ukraine government’s demands. A police building in yet another city in Ukraine was seized today, defying government warnings that it was preparing to act against the insurgents.

“What we have seen over the weekend is very serious. It’s difficult to accept that the developments that have taken place over the weekend have happened of their own accord. There appears to have been a degree of coordination involved. In many ways it’s reminiscent of what happened in Crimea before the annexation. That serious situation is something the foreign affairs council is going to address today,” Mr Gilmore said.

He said the meeting would consider adding to the list of names to whom sanctions have already been applied, while ministers will also look at the timetable of so-called ‘phase three’ sanctions’.

He said the question of expanding the current list of individuals targeted by so-called ‘phase two’ sanctions would be discussed.

Asked whether the developments in eastern Ukraine would increase the likelihood of more sanctions, Mr Gilmore said: “Certainly what happened over the weekend is certainly going to occasion the foreign affairs council to look more urgently at the issue of Phase Three. Phase Three has always been conditional on Russia de-escalating the crisis that exists in Ukraine. I think what we have seen certainly hasn’t been a de-escalation and (we need to) look more closely at the facts to see what has happened at the weekend is part of an escalation or perhaps as a prelude to something else. “

Mr Gilmore said he was concerned about the build-up of Russian troops on the Ukraine border and repeated an earlier call for de-escalation.

“We’ve always been concerned about the build up of troops on the border. That adds an air of menace to the situation. We have for some time been arguing that troops need to be be brought back to barracks. What needs to happen in Ukraine is a de-escalation of the temperature, everybody to work together to try and de escalate the situation, and to support Ukraine given the economic difficulties it has.”

Today’s meeting will also discuss recent developments in Syria and the EU’s engagement with Bosnia-Herzegovina.

“Ireland is a strong supporter of Bosnia’s EU perspective. I am therefore looking forward to a strategic discussion on Bosnia, with a view to adopting Council Conclusions setting out a broader agenda of EU engagement towards the country,” Mr Gilmore said.