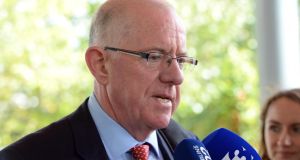 Minister for Foreign Affairs Charlie Flanagan said his thoughts were with the families of those who had lost loved ones on the ill-fated airline. Photograph: Eric Luke / The Irish Times

The Irish woman who died on Malaysia Airlines flight MH17 had returned home from Australia to assist her siblings in the care of her mother who had been injured after suffering a fall.

Edel Mahady, who was aged in her 50s and originally from Palmerstown, had been visiting family in Dublin and was on her way home to Perth, Australia where she had lived for about 30 years.

She is survived by her husband, originally from Lucan, and two children aged in their 20s who, a source close to the family said, had been left “shocked and traumatised” by news of her death.

Last night the Department of Foreign Affairs confirmed that an Irish national had been onboard but declined to comment further, other than to say the family was in receipt of consular assistance.

Ms Mahady, nee Byrne, had been a regular visitor to her home country and was described last night as “a lovely person, fun-loving and gregarious and very attentive to her family”.

She had arrived home a couple of weeks ago. “Her family are greatly shocked and traumatised,” said a source. “Getting that news, you know. [It is] absolutely mind-numbing; [they are] numb with grief.”

Minister for Foreign Affairs Charlie Flanagan said his thoughts were with the families of those who had lost loved ones on the ill-fated airline. “Sadly, we have learned that one Irish-born citizen was on board the flight to Kuala Lumpur, ” he said.

“On behalf of the Government and people of Ireland, I would like to convey deepest sympathies to her family, both in Ireland and in Australia, who have suffered this sudden and devastating loss.

“I spoke to her family earlier today to convey my sincere condolences. I assured them that my department is available to provide any assistance they may require over the coming days and months.

“Ireland fully supports calls for a full, independent international investigation to establish the cause of this grave tragedy and to ensure that those responsible are swiftly brought to justice.”

It also emerged that Ms Mahady was a first cousin of Anne Fitzsimons, the wife of Co Westmeath Labour TD Willie Penrose.

Tributes were also paid yesterday to Sr Philomene (Phil) Tiernan who had spent last May at All Hallows College in Dublin and who also died in the tragedy. Sr Tiernan was born in Australia but was of Irish descent.

Irish nun Sr Aideen Kinlen from the Society of the Sacred Heart was one of the last to see her before she stepped onboard the plane. The pair had recently spent time together on a retreat in France.

Sr Aideen said: “She was a wonderful person - a happy, committed religious woman. And she was a very outgoing type of a woman with a terrific sense of humour.”