Former prime minister a consensus-builder who modernised the country 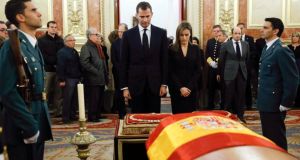 Spain’s Prince Felipe and Princess Letizia stand in front the coffin of former prime minister Adolfo Suárez during his wake at the Spanish parliament in Madrid yesterday. Photograph: Juanjo Martin/Reuters

Public figures and politicians of virtually all stripes came together in Spain’s Congress yesterday to pay tribute to Adolfo Suárez, the prime minister who led the country into its democratic era and who died on Sunday at the age of 81.

Suárez, who had suffered from a long-term illness, was the first democratically elected prime minister after the death of dictator Francisco Franco in 1975. He governed until 1981.

The presence at yesterday’s congressional homage of Spain’s former prime ministers, its senior politicians and members of the royal family reflected the esteem in which he was held by the establishment. And the hundreds of people who patiently filed into Congress to pay their respects before his coffin spoke volumes about his status as a key player in Spanish history.


Three days of mourning
Although he came from within the Franco regime, Suárez was a consensus builder who pushed through a raft of reforms that modernised the country and he supervised the drawing up of the 1978 constitution, which still stands today.

“It is a great loss for Spain. We owe him everything,” said Prince Felipe. The prince’s father, King Juan Carlos, who was also present, was a close friend of Suárez and the two men are today regarded as the figureheads of what became known as la transición , or the democratic transition.

Three days of mourning have been declared and Suárez will be buried today in the cathedral of Ávila, in his home province.

In 2010, a domestic poll by Metroscopia showed Suárez, who by then was known to be suffering from Alzheimer’s disease, was the most admired public figure in a list that included Barack Obama, Pope Benedict XVI and other politicians from Spain and abroad.

However, Spaniards’ reverence for the transition and Suárez’s statesmanship has thrown into relief the contempt in which they hold their current generation of politicians.

“[Suárez] was the father of the Spanish transition, he played a major part in our democracy” said Víctor Ortiz, a computer technician who was born in 1978. “But today, the politicians are all liars and they’re just looking out for themselves.”

This discontent with those who are governing was particularly evident just hours before the former leader’s death, as tens of thousands of people crammed into the Plaza de Colón and its surrounding streets in central Madrid to stage a demonstration. Unemployment and the economic policies of conservative prime minister Mariano Rajoy were major targets of the protest, but so too were corruption and the political system as a whole.

Ironically, the violent clashes that took place between a small group of demonstrators and police in the early hours of Sunday morning were reminiscent of the most uncertain days of Suárez’s tenure, when democracy was hanging in the balance.


Economic crisis
The economic crisis of the last half-decade has presented Spain with its stiffest trial since the transition years and there is a feeling that the country has failed to rise to the challenge.

“Decisiveness, consensus-building, putting the public interest ahead of party interests, understanding ordinary Spaniards . . . What does that remind you of? Everything we’re lacking today,” noted El País newspaper columnist Fernando Vallespín as he recalled Suárez’s qualities. “Suárez was at the very beginning of a process which today is showing signs of being worn out.”

That exhaustion extends to the image of the country’s banks, the politicised judiciary, a Catholic Church that is often accused of being overly powerful and out of touch, and the royal family, which has been plagued by scandals.

Vallespín, like many other commentators, believes that Spain’s recent economic woes have revealed political and institutional shortcomings. Suárez’s achievements, he adds, can still “serve as an example to bring about the rebooting of the democratic system that we need”.